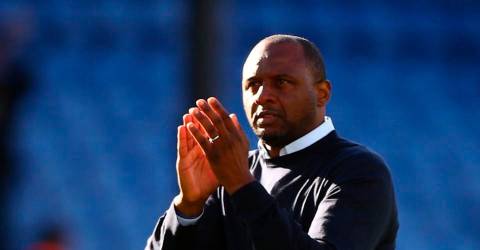 LONDON: Patrick Vieira has called for black players to be given more opportunities in coaching and at the executive level in football.

The Crystal Palace boss is the only black manager in the Premier League, compared to 43 percent of black players in English football’s top flight.

Last week a report from The Black Footballers Partnership found that in England only 1.6 percent of executive, leadership and ownership positions in football are held by black people.

“When you are looking at the top five leagues in the world and you’re looking at the number of black coaches you have in the first or second division, it is not enough,“ former Arsenal captain Vieira, a World Cup-winner with France, told the BBC.

“We need to be given more opportunities to show that we are as good as anybody else.”

England’s Football Association introduced a diversity code in 2020 that aims to tackle racial inequality to which all clubs in the Premier League have signed up.

But the code has been criticised by Les Ferdinand, the only black director of football in the English game at London’s Queens Park Rangers, the current leaders of the second-tier Championship, for failing to make a difference.

“If I’m not as successful at QPR as I want to be, for whatever circumstances, I’ll never get another opportunity to do this job,“ Ferdinand told The Times.

“The FA keeps putting initiatives in but it’s all talking. I’ve been having this conversation about a glass ceiling for Black coaches with the FA for 30 years and nothing’s changed.” – AFP