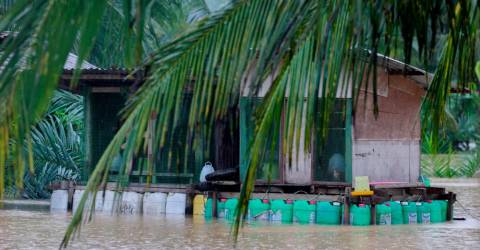 SEGAMAT: Having seen his livestock swept away by the floods about two years ago, compelled a village worker to build a floating coop to safe his livestock from floods.

Aankurniawan Herman, 36, together with his family members spent almost RM10,000 to build the coop and cage.

He said the coop and floating cage built on a raft using the money collected with his seven siblings, can accommodate as many as 30 chickens, 30 goats, 10 ducks and geese.

“We pulled our weight together to build these cage and coop and did not use the services of others and the hard work has paid off because our livestock is safe.

“These livestock are not for sale but for our own use since we have many family members and our house is far from people. Breeding our own livestock is more economical,“ he told Bernama when met in Kampung Sermin, here, today.

The father-of-one also used large barrels to keep the cage and coop afloat.

Aankurniawan said his house was flooded at about 6 am on Monday and within just half an hour, the water level had submerged almost the entire ground floor.

At this time, he and his father Herman Rahman, 66, took turns to look after the coop and cage to ensure that their livestock was not stolen.

“My father and I go on shifts as other family members are in the temporary relief centre. We do so in this small floating hut to look after the livestock and property in the house.