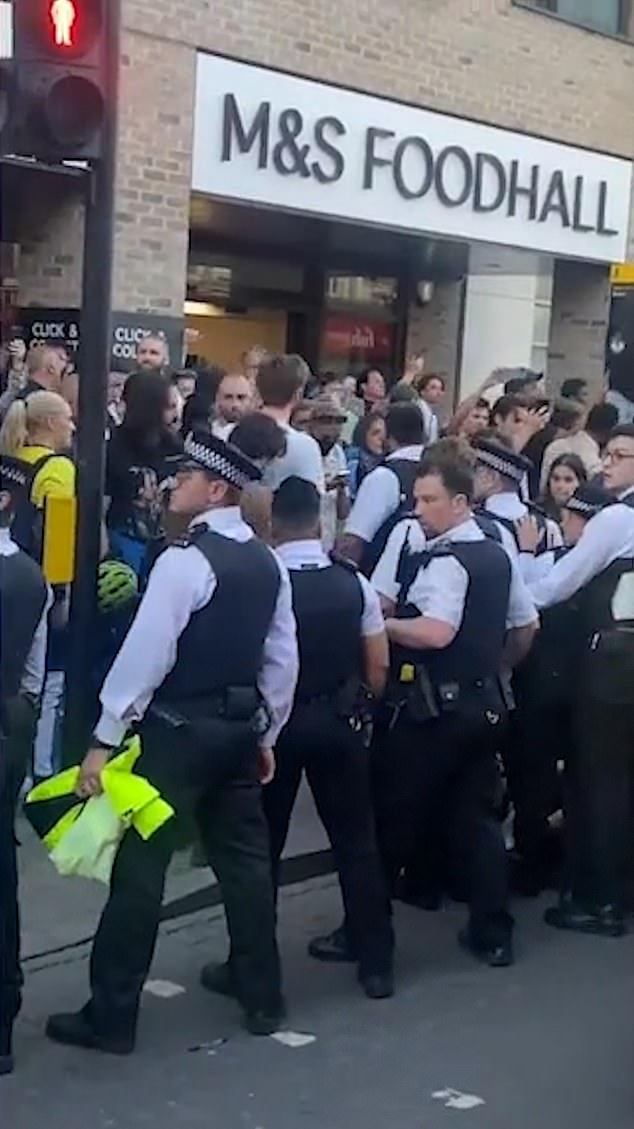 By Charlotte Mclaughlin and Chay Quinn and Matthew Lodge For Mailonline

Met Police have said the force is investigating a social media video which appears to show an officer repeatedly hitting an individual in the head during violent clashes in east London yesterday.

Scotland Yard claims they were carrying out a pre-planned operation ‘targeting e-scooters and moped-enabled crime’ in Dalston when they stopped a man for immigration offences.

In a video posted on Twitter which has been called ‘police brutality’ a man is seen being detained by officers and struggling before he is struck in the head five times while on the floor.

Other officers are also seen standing beside a police van outside Kingsland Shopping Centre during the confrontation in the evening.

As officers arrested the man, a crowd of people gathered in an attempt to stop them and a number of officers were assaulted during the incident, police said.

The force added ‘any footage showing use of force’ was being ‘reviewed’ by the Directorate of Professional Standards.

Nine people, who were arrested for offences including violent disorder, remain in police custody.

Some social media accounts appear to urge people to go to the area to protest an ‘immigration raid’.

Nine people were arrested for offences including violent disorder. They remain in police custody

In a statement, the Met Police said: ‘We are aware of a number of videos on social media filmed during the incident.

‘We would urge people to remember that such videos rarely provide a full and accurate picture of what is taking place.

‘Police officers are aware that any use of force must be proportionate and reasonable, and they understand that their actions will be scrutinised as they go about their work and that they will be held to account where appropriate.’

Some accounts on social media appeared to urge people to congregate in the area.

However, police have since said it was not an immigration raid and were instead conducting an operation ‘targeting e-scooters and moped-enabled crime’ when they came across someone wanted for immigration offences.

Lot of people also called the incident on Twitter another example of ‘police brutality’ with one saying: ‘Shocking footage of police brutality during yesterday’s immigration raid in Dalston (London) against food delivery drivers.’ 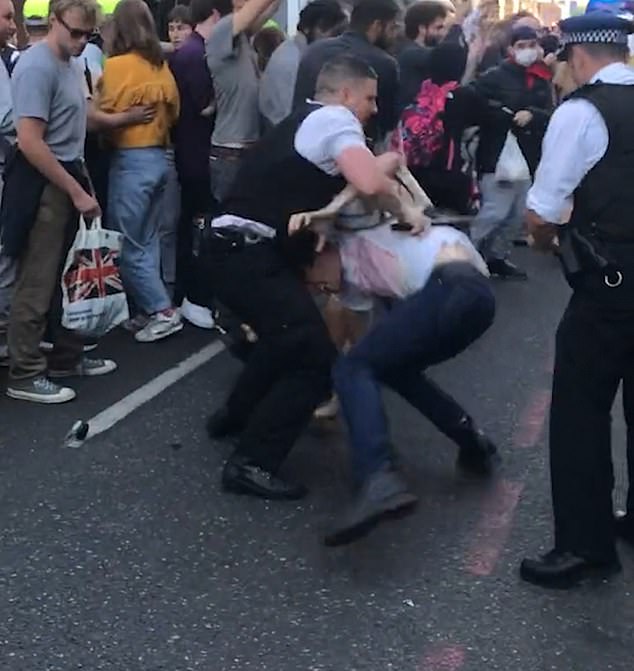 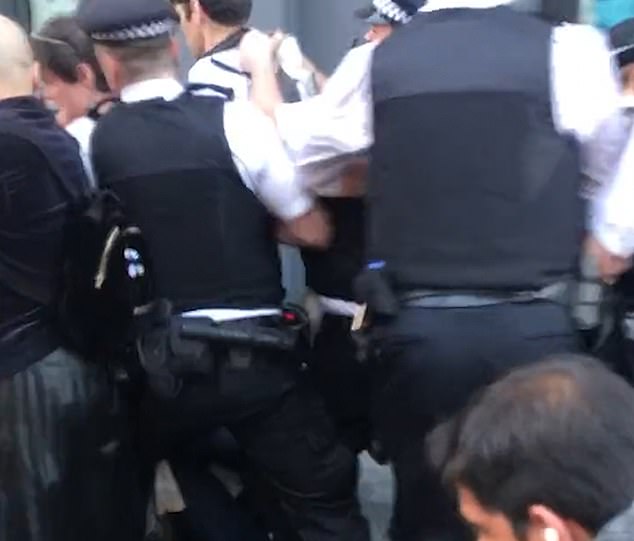 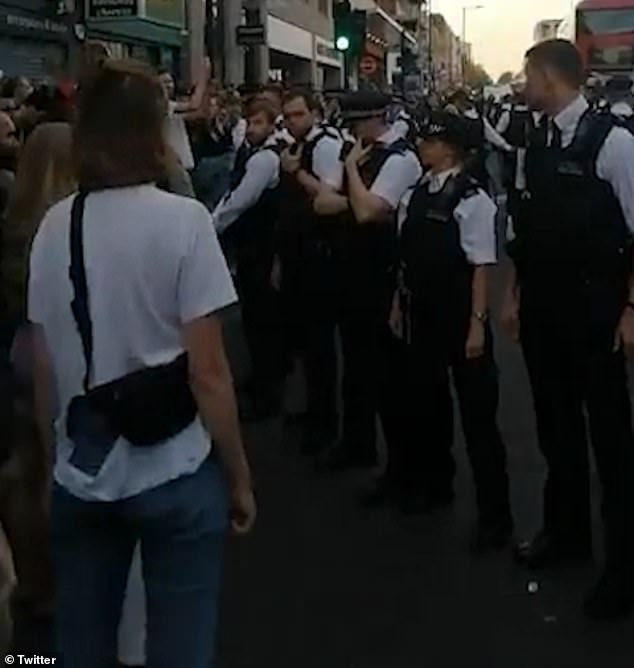 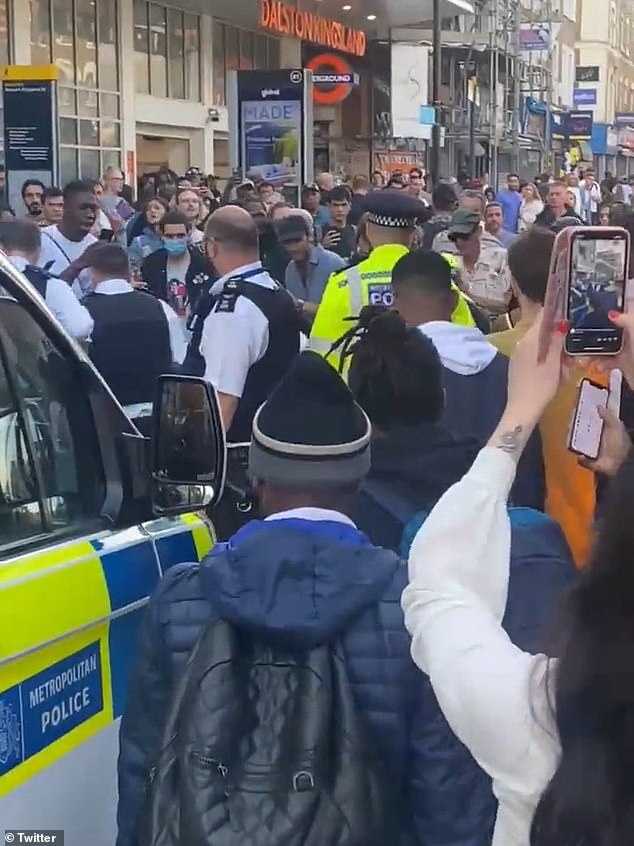 Hackney Police, which is part of the Metropolitan Police, released a statement addressing the incident on Twitter last night.

‘At around 19:00hrs on Saturday, May 14, officers were carrying out a pre-planned operation in Ashwin Street, Dalston, targeting e-scooters and moped-enabled crime,’ it said.

‘In the course of this operation they stopped a man who was shown on police systems as being wanted for immigration offences. As officers went to arrest him for these offences a crowd gathered and tried to stop them.

‘In a very short time the crowd grew significantly in size. We are aware of efforts on social media to summon people to the area specifically to obstruct officers, suggesting the incident was an ‘immigration raid’.

‘A number of officers were assaulted. Fortunately they did not require hospital treatment.

‘Several arrests were made for offences including violent disorder.

‘We are aware of a number of videos on social media filmed during the incident. We would urge people to remember that such videos rarely provide a full and accurate picture of what is taking place.’