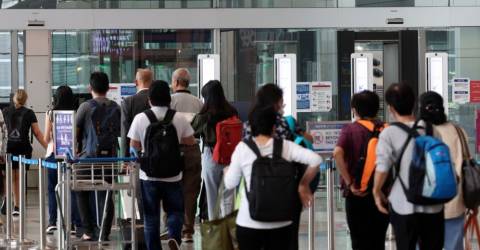 KUALA LUMPUR: The country’s main transportation hubs here are seeing a hive of activities since noon today as voters prepare to travel home in time for the 15th general election (GE15) polling day.

Checks by Bernama at the Kuala Lumpur International Airport (KLIA) in Sepang found that the nine check-in counters were busy handling passengers queuing up since morning for routes to Kota Kinabalu (Sabah), Langkawi and Alor Setar (Kedah), Kuching (Sarawak), and Penang.

Malaysia Airlines Berhad, in a statement, said to ease traffic peaks, it will also activate the Service Recovery Plan, including the deployment of MH ranger volunteers to support operations at baggage handling centres and check-in counters.

At the same time, MAS also advised passengers returning home for GE15 to arrive at the airport at least four hours before departure to allow sufficient time for check-in and the necessary document checks.

“Passengers are also encouraged to check-in via web and mobile applications to speed up the process,“ according to the statement.

Earlier, MAS said it would increase the number of flights to 44 from 26, and upgrade from 16 to 24 domestic services on A330 craft to ensure smooth and reliable connectivity for voters ahead of GE15.

At the Terminal Bersepadu Selatan (TBS), people also stood in long queues to buy bus tickets, with Kota Bharu (Kelantan) and Kuala Terengganu (Terengganu) as the most popular destinations.

TBS senior operations manager Faizal Redza Redzuan said more than 23,000 passengers, including students from higher education institutions, are expected to depart from the terminal in stages from today.

Several KTMB staff and auxiliary police officers are also deployed at the entrance to ensure the smooth flow of passenger movement.

Meanwhile, several voters when met said that they were more keen to return to their hometowns earlier to avoid congestion at transportation hubs.

Jefezieziemiora Jenuil, 21, said she was worried that many passengers would check in at KLIA at the same time, so she was always prepared for any possibility.

“This is my first time voting for the Pensiangan parliamentary seat, and of course, I don’t want to miss out like my friends who get the experience of voting for a candidate,“ said Jefezieziemiora from Kampung Sook in Keningau, Sabah.

A student of Universiti Teknologi MARA (UiTM) in Melaka branch, Muhammad Helmi Emli Faizul, 19, said he is returning to Port Dickson (Negeri Sembilan) today with the ticket he bought immediately after the election date was announced on Oct 10.-Bernama