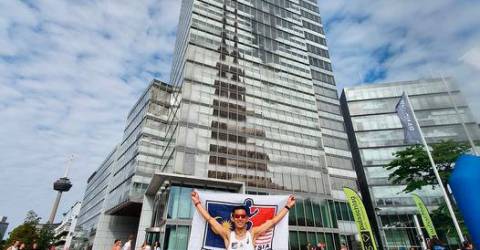 The 28-year-old won the overall category title in the Cologne Tower challenge which is also known as the Germany Towerrunning Championship, by completing the 39-floors of 714 steps (132 meter elevation gain) in three minutes and 17 seconds on Sunday.

Wai Ching who emerged as the overall champion in the 2021 edition by clocking 3:24s, managed to improve his personal best by seven seconds and break the record by six seconds.

The previous course record of 3:23s was set by former world number one Christian Riedl of Germany in 2017.

Commenting on the win, Wai Ching was grateful with his record breaking feat and hopes to achieve a double gold target by winning the Zagreb Tower event on Saturday (Sept 3) to celebrate Malaysia’s National Day.

“Early this month I moved into a new apartment around KLCC area. All thanks to Berjaya Corporation, Better Malaysia Foundation and Majlis Bandaraya Petaling Jaya on becoming my sponsors, and with that I managed to rent a new place on this apartment to be my new training ground.

“Tomorrow I will be travelling to Zagreb, Croatia and start preparing for the next Tower run and my aim is to win the competition and also break the course record! It will be 25 floors, 490 steps and 83.3m elevation gained. I am super excited to achieve a double gold to celebrate Malaysia’s Independence Day,” he said when contacted in Germany. – Bernama