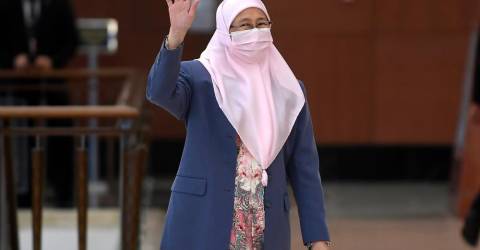 KUALA LUMPUR: Former deputy prime minister Datuk Seri Dr Wan Azizah Wan Ismail (pix) has given her statement to police in connection with investigations into the publication of the book entitled “My Story: Justice in the Wilderness” written by former Attorney-General Tan Sri Tommy Thomas.

“I was called by one ASP Khairul to answer questions related to the mention of my name in Tommy Thomas’ book.

“There were four questions and I answered all. Regarding Tommy Thomas’ views, I answered with facts and they cannot be shared,“ Wan Azizah told reporters after her statement was recorded.

The media had reported that the special task force investigating Thomas’ allegations in the book held its first meeting on Dec 23 last year.

The task force was formed to conduct preliminary investigations into several allegations contained in the book, including on the appointment of judges, excessive interference by the executive body in the judicial system and selective prosecution.

Various quarters including the Attorney-General’s Chambers, lawyers, politicians and members of the public have criticised Thomas for the book, which was published early last year, for allegedly containing elements of sedition, insult and libel. — Bernama