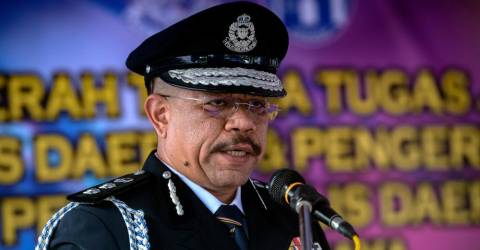 Wan Azlan was previously the deputy head of the Criminal Investigation Department (Intelligence/Operations) of the Negeri Sembilan police.

The handover ceremony, which was witnessed by Selangor police chief Datuk Arjunaidi Mohamed, was also attended by the top leadership of the Selangor police headquarters.

Meanwhile, Wan Azlan in his speech said he hoped the personnel at the Subang Jaya police station will cooperate fully so that he can continue Abd Khalid’s excellent work.

“The previous district police chief has done an excellent job in providing services to the community here,“ he said at the Subang Jaya District police headquarters, here today.

Meanwhile, Arjunaidi said in his speech that he was confident Wan Azlan was capable of shouldering the new responsibilities given with full trust and commitment.

“I would also like to record my appreciation for Abd Khalid’s one year and-nine months of service as district police chief, your contributions and achievements in Subang Jaya are always a source of pride,“ he said.-Bernama