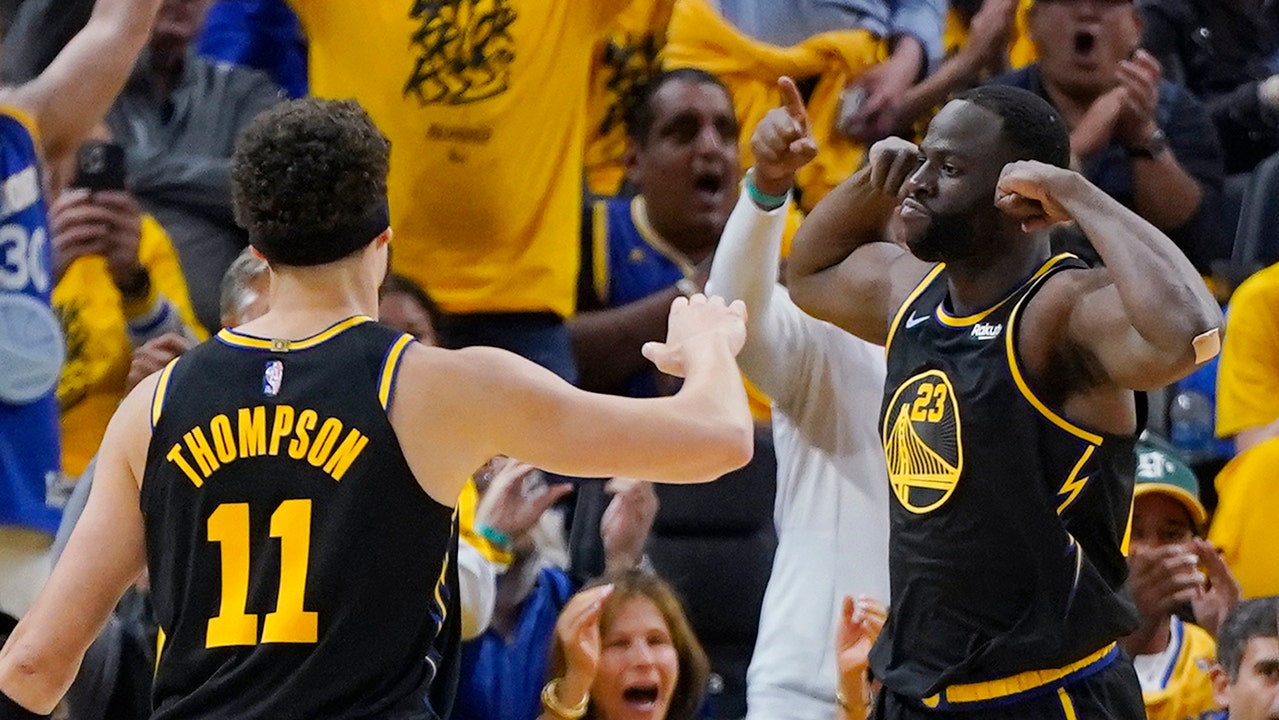 Golden State Warriors’ forward Draymond Green has never been one to hold back, allowing him to have a blossoming media career even while his team heads to its sixth NBA Finals appearance in eight years.

Green told the “Inside the NBA” crew Thursday night Golden State would be facing Boston in the NBA Finals.

The Golden State Warriors celebrate with the Oscar Robertson Western Conference Championship Trophy after Game 5 of the 2022 NBA Western Conference finals May 26, 2022, at Chase Center in San Francisco.
(Noah Graham/NBAE via Getty Images)

Following Golden State’s 120-110 Game 5 win over the Dallas Mavericks in the Western Conference finals Thursday night, Green was asked by “Inside the NBA” analyst Shaquille O’Neal who he would prefer to face in the Finals since the Miami Heat and the Boston Celtics are still vying for the Eastern Conference crown.

As usual, Green was blunt, telling Shaq who Golden State would be facing rather than who Green would prefer to face.

HEAT VS CELTICS GAME 5 SCORE: MIAMI GOES COLD AS BOSTON MOVES TO WITHIN ONE GAME OF THE NBA FINALS

Stephen Curry (30) of the Golden State Warriors drives past Reggie Bullock (25) and Luka Doncic (77) of the Dallas Mavericks during the third quarter in Game 5 of the 2022 NBA Western Conference finals at Chase Center in San Francisco May 26, 2022.
(Ezra Shaw/Getty Images)

“I think both teams are tough,” Green said after Game 5. “Boston causes problems, especially offensively. Their defense is incredible.

“If you’re asking me who I want to play, I’m gonna tell you who I think we’re gonna play,” Green continued. “We’re gonna play Boston. That’s who we gonna play.”

The Heat head to Boston Friday night for Game 6, where the Celtics will be looking to close out Miami with a chance for the organization’s first NBA Finals appearance since 2010.

Golden State Warriors forward Draymond Green (23) celebrates next to guard Klay Thompson (11) during the first half in Game 5 of the team’s NBA Conference finals matchup against the Dallas Mavericks in San Francisco Thursday, May 26, 2022.
(AP Photo/Jeff Chiu)

Golden State is back where NBA fans have grown accustomed to seeing them after a two-year hiatus, as a healthy Steph Curry and Klay Thompson have been aided by multiple young additions.

The emergence of shooting guard Jordan Poole has allowed Thompson to slowly work his way back from two devastating injuries. On Thursday night, the Warriors received a throwback performance from Thompson, as the five-time All-Star exploded for 32 points, shooting 8-16 from the 3-point line.

“We’re happy to be here, but it would help our legacy a lot if we completed the mission and won the whole thing,” Thompson said. “We can be happy tonight, and we will be. I’ll celebrate tonight. But tomorrow when this Game 6 comes on, I’m turning the page, and I’m scouting because we want to finish this thing off the right way.”

The NBA Finals are scheduled to begin Thursday, June 2.