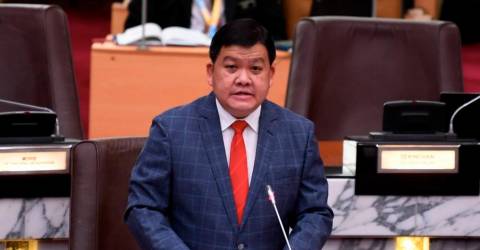 SHAH ALAM: The flow and colour of Sungai Chandong water in Pulau Indah, Port Klang near here, which was reported to have turned red yesterday, has returned to normal following the day-long high tide phenomenon.

State Tourism, Environment, Green Technology and Orang Asli Affairs Committee chairman Hee Loy Sian (pix) said checks carried out by the Selangor Water Management Authority (LUAS) at around 8pm also found that the river flow was back to normal and based on information from the public the tide was still high at 5pm.

Hee said the incident was believed to have occurred early in the morning and the public suspects that discharge of effluent were going on at the Pulau Indah industrial area.

“LUAS has detected and found the origin of the effluent discharge due to the presence of reddish fluid in the drain in front of a premises in Jalan Sungai Pinang.

“The colored water is believed to have been released into a drain and flowed into the retention pond of the Irrigation and Drainage Department (JPS) before entering Sungai Chandong. The distance between the drain to the pollution site is around 1.32 kilometres,“ he said in a statement today.

Hee said LUAS had conducted sampling for analysis in the laboratory to identify the contaminants.

“LUAS will continue to monitor the situation from time to time together with the agencies involved to ensure that the quality of water sources in Selangor is protected. We will work with the surrounding residents to identify the perpetrators and take appropriate action,” he said.