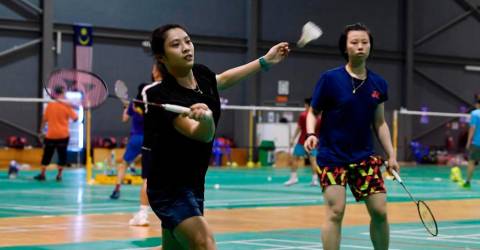 BANGKOK: They were only a win away, but nerves got the better of the Malaysian team as they fell 2-3 against Denmark in the opening Group C match of the 2022 Uber Cup Finals here, today.

After former world junior champion Goh Jin Wei handed a 2-1 lead against The Valkyries, national second doubles pair Anna Ching Yik Cheong-Teoh Mei Xing, missed out on the golden opportunity to secure their maiden victory against the opponents at the Impact Arena, here.

The duo lost 14-21, 10-21, to Alexandre Boje-Amalie Magelund which put the Danes right back into the game before Line Kjaersfeldt delivered the winning point for Denmark, trouncing the inexperienced Myisha Mohd Khairul 21-12, 21-9 in just 33 minutes.

Anna admitted that their first-ever meeting against Danes did not go well as they failed to absorb the pressure while on the court.

“We have to learn to handle pressure, this time we didn’t handle it well, and in the end we underperformed. We need to calm down and recover to prepare for the next match against Thailand tomorrow, “ she told reporters when met at the mixed zone after the match today.

In the meantime, Myisha said she was gutted that her debut in the Uber Cup did not go as planned as she could not prevent Denmark from taking the first group victory today.

The newly-crowned Dutch International Series 2022 champion acknowledged that she was less aggressive on the court.

Commenting on the overall performance of the squad, Badminton Association of Malaysia’s (BAM) Singles Coaching director Wong Choong Hann said some of the players were not on par with the Danes.

Choong Hann added that he would discuss with the coaching team to determine the lineup for the must-win match against favourites Thailand, to revive their chance of heading into the last eight.

Although she went down 14-21, 15-21 against Mia Blichfeldt in the opening match, national women’s singles ace S. Kisona believed there was some improvement in her performance after losing to the same opponent in last year’s edition in Aarhus, Denmark, 11-21, 7-21.

“It was a tough match, but overall I have improved a lot in terms of strength and fitness, I just need to push a little bit to get back to my best form,” she said.

Their sixth straight defeat against Denmark in the tournament puts Malaysia in a tough spot, as they could miss out on the quarter-finals if they falter again.-Bernama