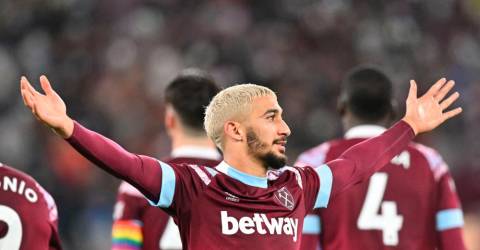 LONDON: A goal at the end of each half from Kurt Zouma and Said Benrahma was enough to give West Ham a welcome 2-0 win over Bournemouth in the English Premier League on Monday although both goals were tinged with controversy.

Zouma’s first goal since November 2021 was allowed to stand by the VAR despite a clear handball by Hammers defender Thilo Kehrer.

Benrahma then converted a stoppage-time penalty after VAR spotted a handball against Bournemouth substitute Jordan Zemura.

Victory marked a fifth successive win in all competitions at the London Stadium for West Ham who climb to 10th, in the top half of the Premier league for the first time this season.

The key moment came at the end of a scrappy first half when Kehrer scooped Jarrod Bowen’s corner into the air before it was headed clear by Chris Mepham, nodded back by Tomas Soucek and eventually over the line via the top of Zouma’s head.

The handball was deemed not to be deliberate and had not led directly to the goal so it was allowed to stand.

Bournemouth caretaker boss Gary O’Neil was angry with the decision, telling the referee: “It’s a handball, that’s a fact.”

The former West Ham midfielder, who has been in charge since the sacking of Scott Parker at the end of August, was booked for his protests.

“He (Kehrer) has no intention of playing the ball. It’s a blatant handball. His hand moves towards the ball,“ O’Neil told Sky Sports after the game.

“I’m not surprised because it’s getting ridiculous. Since I’ve been here there’s been 10 serious VAR checks and none have gone our way.”

With time running out at the end of the game, Vladimir Coufal’s cross hit the hand of Bournemouth’s Zemura as he slid in to block.

Referee David Coote consulted with VAR and duly awarded the penalty which Benrahma fired past Mark Travers, who had come on at half-time for the injured Neto.

“The performances are getting better but are still not taking enough chances,“ West Ham coach David Moyes told the BBC, adding that he had not seen either of the controversial moments.

“I’ve not seen the first goal yet or the penalty kick,“ he said. “I think our performances deserved more than a scruffy set-piece goal and a penalty.” – AFP