Boris Johnson has won a mandate for his manifesto to take Britain out of the EU by January 31, hire 50,000 new nurses and introduce a points-based immigration system, according to the exit poll.

The Conservatives are forecast to win 368 seats, a majority of 86 – their highest since Margaret Thatcher’s third election victory in 1987.

The projected result is a triumph for Mr Johnson and a crushing defeat for Jeremy Corbyn‘s vision of a socialist Britain.

Launching his manifesto last month Mr Johnson promised to open a ‘new chapter’ for the country and the exit poll suggests that voters have welcomed his plans.

Mandate: Boris Johnson has won a mandate for a Tory manifesto which promises to take Britain out of the EU by January 31 and introduce a points-based immigration system

Mr Johnson struck a revised Brexit deal with Brussels earlier this year, removing the much-derided ‘backstop’ from the agreement reached by Theresa May.

However, Mr Johnson could not get it through Parliament before the previous October 31 deadline.

That impasse prompted Mr Johnson to demand the general election, which Mr Corbyn eventually agreed to.

Every Tory candidate backed the deal, Mr Johnson said, meaning that the withdrawal agreement bill should now have a more comfortable passage through Parliament.

That means Mr Johnson should be able to met his promise of leaving the European Union by January 31, setting the stage for further trade talks with Brussels.

Once Britain has left the EU, the Tory government plans to introduce an ‘Australian-style’ points-based system to manage immigration.

Mr Johnson repeatedly said during the campaign that finishing Brexit would allow the government to turn its attention to the ‘priorities of the British people’.

‘Get Brexit done and we can focus our hearts and our minds on the priorities of the British people because it is this One Nation Tory party that is already embarked on the biggest cash boost for the NHS for a generation,’ the Prime Minister said at the manifesto launch in Telford. 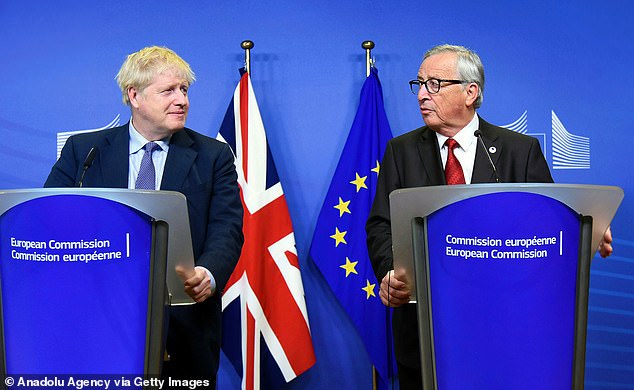 New deal: Mr Johnson struck a revised Brexit deal with Brussels earlier this year, removing the much-derided ‘backstop’ from the agreement reached by Theresa May

Aside from Brexit, the Tories’ key manifesto pledges include a cash increase for the NHS of £33billion a year by 2023/24 compared to current budgets.

Health secretary Matt Hancock told the BBC the extra 50,000 nurses would be brought in over the Parliament through ‘a combination of training and extra university places, also nurse apprenticeships which allow people to train as they work, and there will be some recruitment from overseas with our new NHS visa.’

The NHS was a central issue in the campaign as Labour claimed that Mr Johnson was planning to offer up the health service to US trade negotiators.

The Tories repeatedly denied Mr Corbyn’s accusations and it appears that the Labour message failed to persuade the electorate. 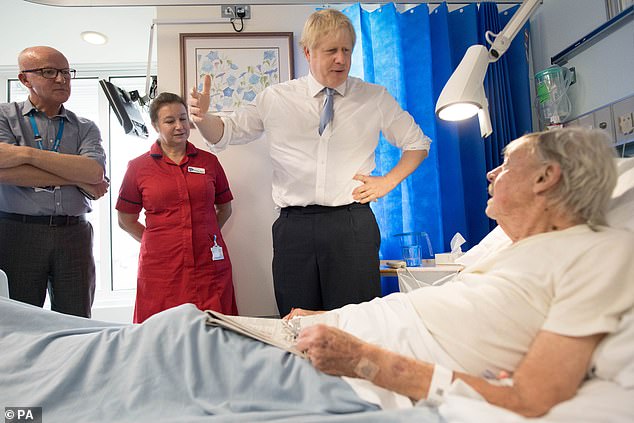 Health: Aside from Brexit, the Tories’ key manifesto pledges include a cash increase for the NHS of £33billion a year by 2023/24 compared to current budgets

Tax: Increasing the threshold at which people make National Insurance contributions to £9,500 in April 2020. Cost: £2.2bn

Tax: Increasing the threshold at which employers make National Insurance contributions from £3,000 to £4,000. Cost: £470m

Corporation tax: Keeping the rate at 19 per cent instead of dropping it to 17 per cent. Will generate: £3bn

Transport: Reverse some of the cuts to the rail network resulting from the 1960s Beeching report. Cost: £500m

Financial pledges in the Conservative manifesto were more modest than Labour’s promises of a spending spree and widespread nationalisation.

In a bid to show he was not in the pocket of business, Mr Johnson shelved a planned corporation tax cut during the campaign, promising to keep the rate at 19 per cent.

Mr Johnson also wants to raise the threshold at which people start making National Insurance contributions to £9,500 in April 2020, with an ‘ultimate ambition’ to raise it to £12,500.

The Tory manifesto also promised a ‘triple lock’  of no increases on income tax, National Insurance or VAT.

The employment allowance will also be increased from £3,000 to £4,000, the manifesto says.

The Tory manifesto contained a pledge to spend £750million to start delivery of the government’s promised 20,000 additional police officers.

There is also a promise of initial funding towards a £2.5billion commitment to create an additional 10,000 prison places.

Officers could also be given more tasers and body-worn cameras to protect them.

Other key manifesto pledges include: 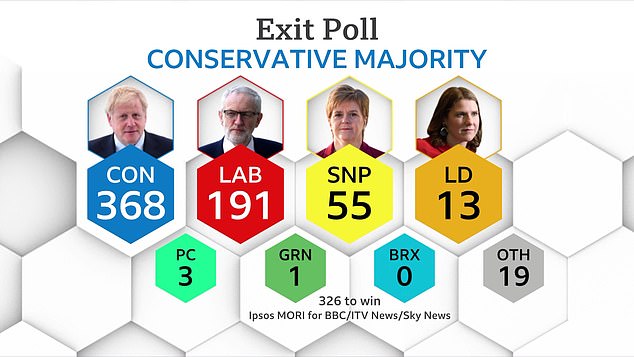 Forecast: The exit poll shows the Conservatives on course for a large majority, their largest since 1987 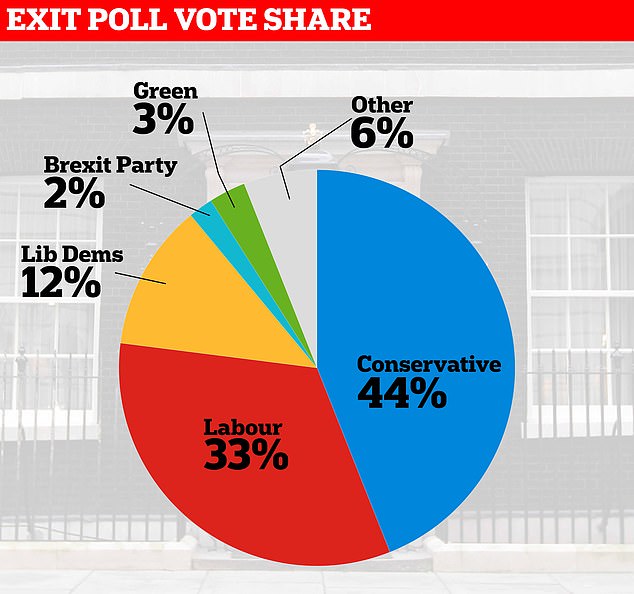 Projection: The Conservatives are set to improve on their 2017 vote share while Labour’s slumps as voters reject Jeremy Corbyn’s socialist vision for Britain

A pledge to reach net zero carbon emissions by 2050.

Introduce a ban on exporting plastic waste to third world countries. to prevent it being dumped in the ocean.

Investing another £2.5billion in Home Upgrade Grants so that people can replace boilers and improve insulation.

Mr Johnson previously confirmed that he wants to bring his Withdrawal Agreement Bill back to Parliament before Christmas if he wins the election.

Although the bill cannot complete its passage through Parliament before the festive break, it is a clear signal of intent to get it through in time for Britain to leave the EU by the January 31 deadline.

Following the election, the new House of Commons is due to sit for the first time on Tuesday, December 17.

The first two days are likely to be taken up with the swearing in of the new MPs, potentially with the State Opening and the Queen’s Speech on the Thursday.

That could mean MPs sitting the following Monday – the start of Christmas week – to allow the WAB to be formally introduced, although it is not clear whether there could be any further progress before the holiday.