From boozy buyers to sleep-deprived spenders, we all have different ways to splash our cash. Laura Craik identifies the key personality types. Recognise yourself here?

Everybody loves to shop. It’s fun, and if you didn’t do it your house would fall apart and you’d look like a relic from the 70s – not in a good way. But not everyone shops the same. Some are cautious. Some are wanton. Some are Carrie Bradshaw on speed. Some spend on holidays. Some splurge on clothes. And some blow it on baltis and burgers (such as Cara Delevingne who, it’s been alleged, has spent £19,000 on takeaways since 2014). A recent survey found that 34 per cent of online consumers regretted their fast-food purchases, although their biggest regrets are reserved for fashion, with 44 per cent buying something they wished they hadn’t.

Do you buy in haste, regret at leisure? Then you might recognise yourself here. I know I do.

It’s 10pm on Friday, and Sauvignon Sue is in full flight. Graham Norton will be on shortly but before that, there’s just enough time to abuse her debit card. Laptop on knee, sauv blanc on coffee table (it’s a good one; going down like lemonade), Sue’s feeling spendy. A bottle of Hawkland Bay will do that to a woman. She knows she shouldn’t – the mortgage, the vet’s fees – but oh, the Net-a-Porter website is tempting. She has a 50th birthday next weekend. Off she scrolls.

Ooh, that’s nice. Could she rock a £550 raspberry pink ‘gathered metallic stretch-knit midi dress’? Too many adjectives for a Friday night. OK, so the front is a bit low, but what else is tit tape for? She giggles, alone in her living room while the kids slumber upstairs. Tit tape! At her age! She clicks to buy. Look on the bright side, Sue. A quick straw poll around the office reveals a plethora of alcohol-fuelled buys far more cavalier than yours. We know someone who booked a holiday in Tenerife, one who purchased a fake Rolex watch and another who bought a kitten. You can’t return a kitten when you sober up. Think before you drink before you buy, people. 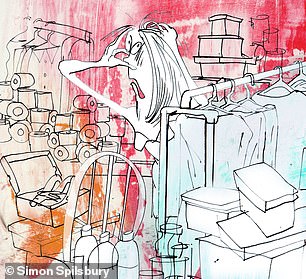 Alice is a lovely woman. Really lovely. But she’s in full fretting mode. Things that other people deal with on a daily basis stress her out: she’s never used an electric blanket, she still crosses by the green man and she avoids spirits because she can never be quite sure whether she’s got the ratio of gin to tonic right. Every time her children leave the house, she is convinced they will die.

But if she is anxious about everyday life, she gets even more het up about shopping. Since it stresses her to throw anything out, she’s a big hoarder and frequently forgets what she’s already bought. No matter that she already has 25 white shirts, 32 navy jumpers and more scarves than you can shake a long, dangerously pointy stick at; Alice still finds herself buying more. It’s why there are 165 loo rolls in the kitchen cupboard, so many garden implements that the garage door won’t shut and enough bottled water to clear the oceans. But it’s the thought of a hard Brexit that has really tipped poor Alice over the edge. How many soup tins, antibiotics and exotic French cheeses should she stockpile? There isn’t a kitchen big enough. She’ll have to move house. 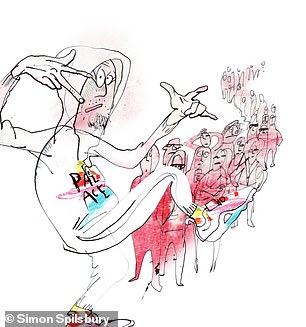 DRRRRNG! Oh God, is it 4am already? OK. He’s got this. Within minutes and without showering, he’s pulled on his limited-edition Game of Thrones x Adidas trainers and is sprinting out of the door to Soho, to join what he hopes won’t be too long a queue outside cult skatewear shop Supreme. This drop is gonna be a good one. You snooze, you lose.

Hyped-Up Harry may be 51, but in his heart he’s still that young, eager cub who worked for i-D magazine, blagging his way into clubs and going on about A Bathing Ape sweatshirts. By 24, he was of the firm opinion that if it’s not ‘limited edition’, it’s not worth it. He just doesn’t see the point of buying the same stuff that everyone else has. It’s why he once (pre-kids) flew to Japan to buy some Evisu jeans with an ultra-rare selvedge and why every artwork in his house has a small number pencilled in the bottom corner. Not that all his purchases are expensive: they just have to be hyped up. Limited-edition strawberry Kit Kat? He’s all over it.

Living with Hyped-Up Harry can be hard. You learn never to remark that his latest Palace purchase looks like all his other hoodies. You pray that the annual summer holiday won’t involve an impromptu spot of trainer shopping and him looking for the ever-elusive Stan Smith Slim. Still, at least he dresses better than the other dads. 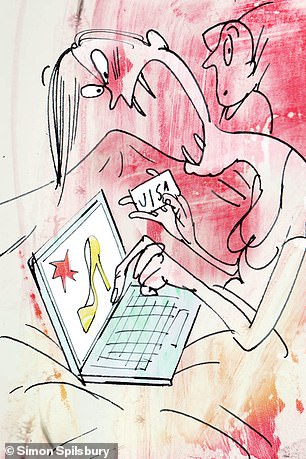 By day, she’s a busy mum-of-three. By night, she’s a raging insomniac. She shouldn’t be – God knows, her days are full enough to suggest she should be sleeping like a baby – but that’s the problem. The baby. Well, he’s 18 months now but still waking up every night. And since her eyes sting too much to read a book, she finds soporific pleasure in some different words: the ones on her computer screen. It might not be great for her circadian rhythm, but Vanessa the Vampire doesn’t care. Sure, it’s 2.09am, but if she buys the Poopsie Unicorn Slime now, it’ll save her a job tomorrow.

She’s sure she can’t be the only person in Britain for whom the only way to keep on top of things is to do them while everyone else is asleep. She’s right. According to Argos, ‘vampire shoppers’, who are most active between 1am and 6am, are on the rise and buying 20 per cent more than the average daytime shopper. Popular products include batteries, baby monitors and video games. 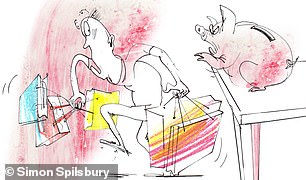 Good old Rob. Generous to a fault. Always gets his round in. In public, Rob is the gregarious, generous life and soul of the party; in private, his generosity comes with strings. Especially with regards to spending any money on himself. Rob didn’t grow up with money, see – far from it – and while his life is comfortable now, he can never shake the memory of his mum shamefacedly borrowing from his piggy bank because she couldn’t pay the gas bill. He would have given her the money gladly, but that wasn’t the point. The point was that money was too tight to mention. Spending it made her feel anxious and now the baton has been passed to him.

He’s not sure when he got into the habit of buying things then taking them back again. All he knows is that he’s on first-name terms with everyone in the post office. Shopping makes him feel good. Spending, not so much. And so he returns the M&S shirt, the De’Longhi coffee machine, the Samsung Galaxy Tab and the Nike Air Max. Even though his current pair are falling apart and smell of brie. The splurging and the purging isn’t ideal but then again, nor is debt.

‘I’m worth it’ Wendy 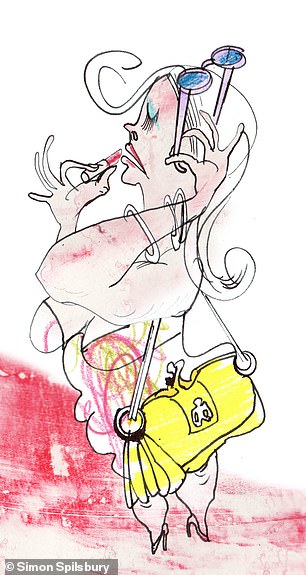 ‘I’m worth it’ Wendy

Some people say that ‘naughty but nice’ is the best advertising slogan ever penned. Wendy would disagree. It might have shifted cream cakes in the 80s, but it never became a mantra or a way of life – unlike that iconic L’Oréal phrase ‘because I’m worth it’. For ‘I’m worth it’ Wendy, no purchase is too rash, expensive or inconsequential not to warrant the invocation of her favourite three words. Packet of Quavers? She’s worth it. New lipstick? She’s worth that, too. She’s also worth Invisalign braces (no metal ones for her), a four-slot toaster (why queue for toast?) and a diamond ring to replace the one Dave bought her back when he was a plumber and hadn’t yet inherited £200K from his dad.

For Wendy, every day is a treat day. Some might say she’s trying to fill the aching great hole left behind by her cat dying or her kids going off to uni and maybe that’s true. But she’s not really one for introspection. Certainly not when Debenhams is having a sale.