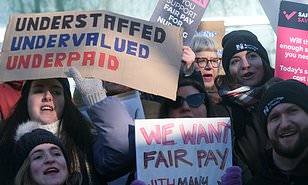 Which of Britain’s striking workforces do you support the most? Vote here and tell us why

By Danya Bazaraa For Mailonline

Britain is seeing workforces across a range of industries striking in their masses in rows against pay and conditions.

Railway workers, Royal Mail staff, Border Force, nurses, paramedics and teachers are among those walking out to say they feel ‘underpaid, understaffed and undervalued’.

Which of Britain’s striking workforces do you support the most?

The country will grind to a halt as co-ordinated action will see hundreds of thousands of train drivers, teachers, airport staff and civil servants strike on February 1.

Around 100,000 civil servants are to strike on February 1 in a worsening dispute over jobs, pay and conditions, the Public and Commercial Services union announced.

The mass walk-out by workers including Border Force, the DVLA and job centre staff is a massive ratcheting up of pressure by militant trade unions.

It is the first time that members of the PCS in different government agencies have co-ordinated their strikes to take place at the same time in this latest period of unrest.

RMT boss Mick Lynch has said: ‘Our negotiations will continue with the rail operators to create a package on jobs, conditions and pay that can be offered to our members.’

It comes as union leaders have said ‘no progress’ was made during a meeting with the Education Secretary in a bid to avert strike action over teachers’ pay.

Gillian Keegan held talks with the general secretaries of unions representing teachers and school leaders on Wednesday after walkouts in February and March were announced by the National Education Union (NEU).

But following the meeting, Mary Bousted, joint general secretary of the NEU, said: ‘At the moment we haven’t heard anything which leads me to believe we can avert this strike.’

Meanwhile, nurses at roughly one in four hospitals across England today took to the picket line as the bitter pay dispute with the Government rumbles on.

The 48-hours of chaos comes after two separate strikes in December, which led to almost 30,000 NHS cancellations across the country.

Thousands of ambulance workers and nurses will go on strike on the same day next month as the pay dispute with the Government shows no signs of reaching a resolution.

MailOnline app users can vote in the poll by clicking here. 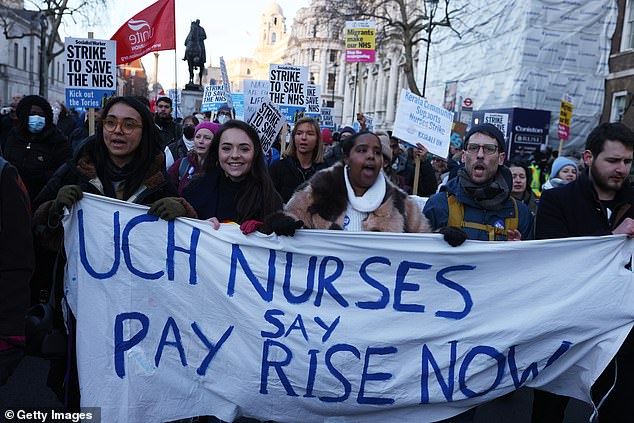 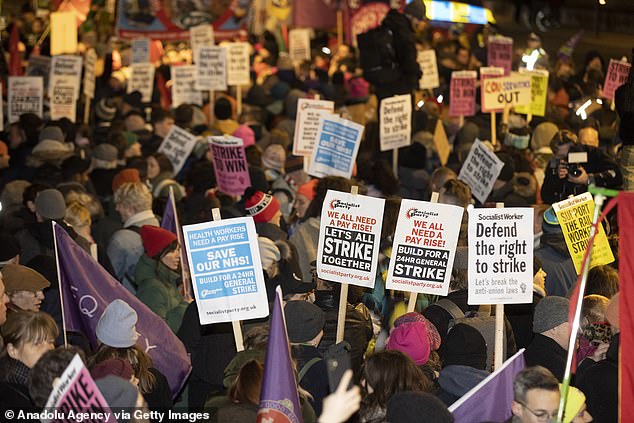 RMT union members hold a rally in front of No. 10 to protest anti-strike legislation plans 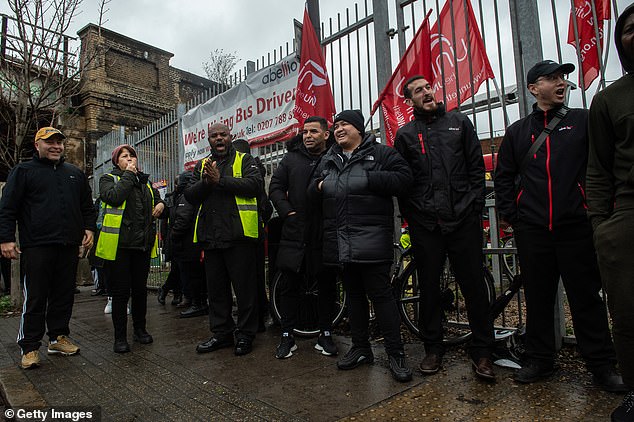 Nurses are also due to strike on February 6 – meaning mass disruption can be expected across the NHS on that day. Nurses will also strike the following day, February 7.

Royal Mail workers have also taken action, with more than 100,000 workers choosing to strike across seven days in December, one of the busiest periods for the postal service.