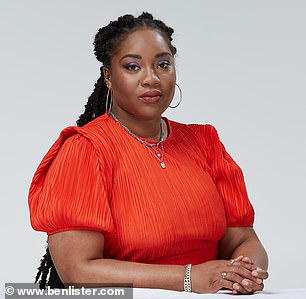 Kemi, 27, (pictured) has been single for eight months

I’m looking for a nice, tall, loyal, funny man who is ready to settle down. No playboys, thank you.

I’ve had one serious r­elationship, which lasted for four years. It was a roller coaster and I needed some breathing space after it ended.

I don’t even try to find people online as I’m too scared, so I’ve never been on a date. My last relationship was with a family friend.

Even though I’m an actress, I can be shy at first. I was nervous and didn’t sleep a wink the night before. For the date I did something I never do — I put on a pair of heels. I wore a nice dress, too, to make myself feel confident.

He’s not my usual type — I normally go for taller guys — but he’s not bad to look at and knows how to present himself well. When we were first seated by the bar, he took charge and found us a more comfortable place to eat. I liked that.

Easy To Talk To?

Liked? That he does things for his community

I can feel uncomfortable when meeting new people, but Kayode made it easy. He asked me about my family and work, so I relaxed and asked him about his life, too.

When he said he was vegan, I told him I was trying to be vegan too, but then ordered the shepherd’s pie. I felt a bit bad about it. He gave me a look, but I kept my head down. I then forgot myself enough to offer him a bite later, which we laughed at.

Apart from us both liking the gym and being healthy, we didn’t have much else in common.

It took me a moment to catch what he said at one point and he asked me, ‘Are you slow?’, which startled me. I did feel a little insulted but he said he was joking, so I just laughed it off as I’m sure he didn’t mean any harm.

Not really. I think we both felt the same way. We hugged before leaving, but no contacts were exchanged — he did ask for my ­Snapchat details but I don’t give them out, so that was awkward. He made me feel so relaxed, which is great because it’s given me the confidence to go on more dates.

Probably not. Though if I saw him out and about, I’d talk to him.

What Do You Think He Thought Of You?

I have no idea. He was hard to read. He mentioned my eyes, but I felt there was no romance in it.

I think so, although my family are protective of me. 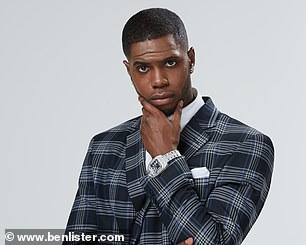 Kayode, 30, (pictured) has been single for a year and a half

I’ve been single for a while but rarely use dating apps as I like to meet people in person or through friends. I’ve had a few relationships lasting a couple of years, but would like to settle down now.

Single for a year and a half.

Someone sweet, cute and not too loud who, like me, wants to settle down and have kids in the future.

I’ve never been on a blind date, but I was looking forward to it. I don’t usually get nervous — I was even on The Apprentice. I dressed up smartly in a checked suit.

Kemi arrived first and we greeted each other warmly. I sensed it was going to be an uphill struggle for me to be impressed, though, as I could tell she wasn’t my type. I just didn’t get an immediate f­eeling of attraction.

But I really noticed her eyes. Although she speaks very quietly, her eyes are so expressive, which I found really interesting.

Easy To Talk To?

Liked? She had lovely eyes

Regrets? No, you have to try things

It was fine at the beginning as I find it easy to chat to people, but whether I want to continue is another story.

We don’t have much in common, although we had a r­unning joke about the way we saw and phrased things. I kept saying, ‘Back in the day’ and she kept laughing, asking if I was really old. She then started saying, ‘Way back then’ which was funny.

But we don’t have many similar experiences, we don’t share any hobbies and our energies are quite different. I’m more e­nergetic.

Not for me, and I think we both felt that very early on. She’s cool, but there was no spark in personality or attraction. We were perfectly civil, but I wouldn’t even say we could carry on as friends.

Probably not. She’s a lovely girl but not my type of person. Of course, I’m not everyone’s cup of tea either. We just had different vibes.

What Do You Think She Thought Of You?

I think she thought I was an OK person, but she didn’t fancy me. We couldn’t find a connection of any kind.

She’s likeable and my family would embrace anyone, but we’re so different I’m not sure we’d fit in each other’s friend groups.