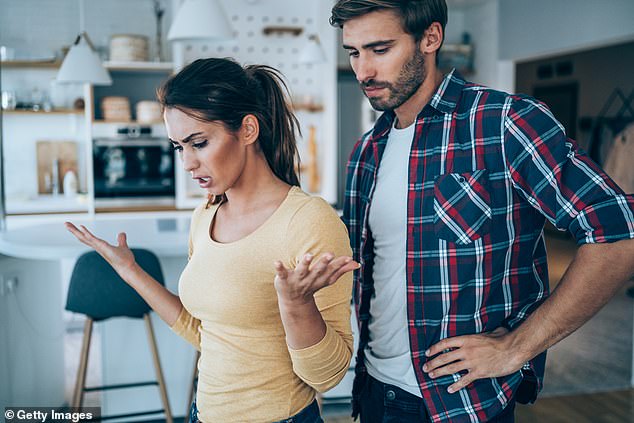 A wife has shared her husband’s ‘ridiculous’ list of demands for his birthday – including refusing to do any chores, not taking care of their son, and skipping out on his portion of the rent – and said he expects her to celebrate for an entire month.

According to Reddit user Change-Ad9635, her spouse said he wants to ‘rightfully be pampered’ for his upcoming 30th birthday.

He wrote out a long list of his ‘expectations’ for his birthday month, which includes no cooking or cleaning, not being interrupted while playing his Xbox for ‘hours on end,’ getting to sleep in without being ‘bothered’ to drive their son to school, and more.

He said his friends and family have been celebrating his birthday for a month his whole life, and when she refused to follow his ‘out of line’ requests, he called her ‘selfish’ for not making his birthday month ‘the happiest month of the year’ for him. 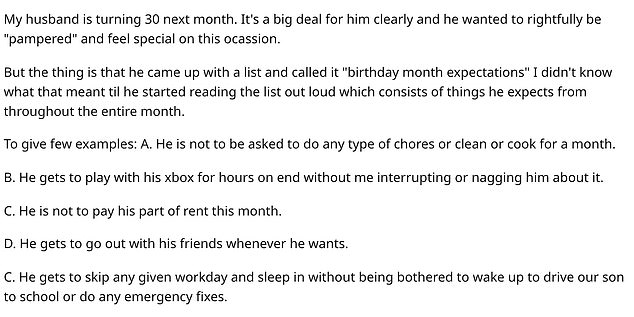 He wrote out a long list of his ‘expectations’ for his birthday month, which includes no cooking or cleaning, not being interrupted while playing his Xbox, and more

The woman posted about it in the ‘Am I An A**hole?’ thread on Reddit, and asked people if she was wrong for not wanting to cater to her husband’s birthday wishes

The woman posted about it in the ‘Am I An A**hole?’ thread on Reddit, and asked people if she was wrong for not wanting to cater to her husband’s birthday wishes.

‘My husband is turning 30 next month. It’s a big deal for him clearly and he wanted to rightfully be “pampered” and feel special on this occasion,’ she wrote.

‘But the thing is, he came up with a list and called it, “Birthday month expectations.”

‘I didn’t know what that meant ’til he started reading the list out loud, which consists of things he expects from me throughout the entire month.

‘To give few examples: A) He is not to be asked to do any type of chores or clean or cook for a month.

‘B) He gets to play with his Xbox for hours on end without me interrupting or nagging him about it.

‘C) He is not to pay his part of rent this month. D) He gets to go out with his friends whenever he wants.

‘E) He gets to skip any given workday and sleep in without being bothered to wake up to drive our son to school or do any emergency fixes.

‘In other words he wants a month long vacation and time off from his responsibilities as a partner and as a father.’

According to the Reddit user, her husband told her, ‘Oh, no worries – this will only last for a month,’ after she expressed concerns over his ‘ridiculous’ demands.

The woman claimed she already does the majority of the household chores and is the main one who takes care of their son. But since they are ‘struggling’ financially, she said she really ‘cannot afford’ to cover his half of the rent.

Lots of people quickly flooded the post with their thoughts, with one writing, ‘If you’re feeling particularly generous you could tell him that your gift is choosing not to divorce him’

‘I cannot afford to do what he’s expecting me to do because we’re struggling already and I need his help especially now,’ she continued.

She said her husband told her she was being ‘selfish towards his wants,’ and has been avoiding her ever since she turned down his list.

She added: ‘He pitched a fit giving me grief about how I’m being selfish towards his wants and that in my place he would’ve agreed to do all he could to make my “birthday month” the happiest month of the year for me.

‘I argued that “birthday month’s” are unheard of and just flat out ridiculous, but he said that I don’t understand because his parents did this for him for years and so did his friends, so as his wife I should be happy to do it as well.

‘But I declined and refused to take it and kept arguing about it. But he hasn’t stopped talking about how disappointed he was that I treat his birthday like that and has been avoiding being near me, making me feel like maybe I went too far here. Am I the a**hole?’

Lots of people quickly flooded the post with their thoughts on the situation, with one writing, ‘[You’re] not the a**hole. As an adult you don’t get a “birthday month.”

‘Month?! What kind of spoiled, entitled s**t is this? You don’t get to ignore your responsibilities for a month. His request is so unrealistic and out of touch with reality.’

Another person added, ‘If you’re feeling particularly generous you could tell him that your gift is choosing not to divorce him.’

Another commenter said they like to celebrate their birthday for a month straight, but they treat themselves, and never expect others to get involved in the month-long celebration

Someone else joked: ‘Reading [the post,] you’d think he was turning 18.’

‘If I pulled that s**t on my wife, I’d expect divorce papers for my birthday present,’ another comment read.

One person said: ‘I mean, he can have a birthday month but be realistic about it.

‘Have decorations up all month long. Have cake once a week. Make your favorite foods for dinner more often.

‘Take a day or two off work if you can afford it. Celebrate it, f**k it. But don’t be f**king ridiculous about it.’

Another commenter explained that they like to celebrate their birthday for a month straight, but they treat themselves, and never expect others to get involved in the month-long celebration.

Other messages read: ‘I would literally laugh in my husband’s face if he pulled this s**t,’ and, ‘I am flabbergasted that this man is a husband and father.’

‘The part about [him] not paying his part of the rent was it for me,’ one final commenter said.

‘Doing the chores? Okay. Letting him play Xbox? Well fine. But not paying your share of the rent when you’re an adult who knows you’re struggling financially?

‘That’s ridiculous. He sounds super entitled and spoiled by his friends and family.’