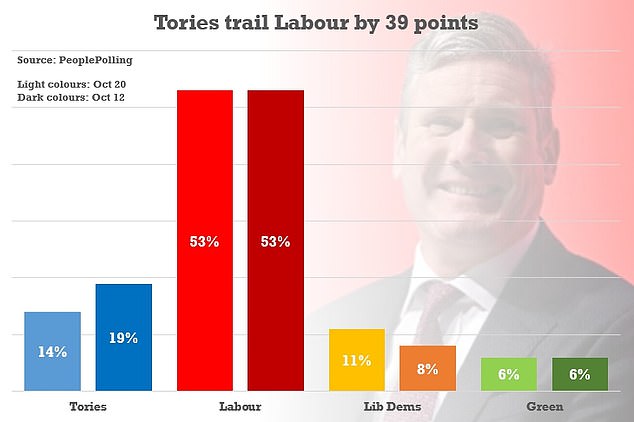 Senior Tory MPs have warned Boris Johnson returning to No 10 would see them quit the party in a threat to the Conservative majority in the Commons.

Veteran backbenchers Sir Roger Gale and John Baron have suggested they would resign the Tory whip if the former Prime Minister were to make a shock comeback.

Mr Johnson is believed to be flying back early from a family holiday in the Dominican Republic in the wake of the latest Westminster drama.

He is said to be ‘taking soundings’ on whether to stand again for the Tory leadership after the humiliating resignation of Liz Truss.

It has prompted fears of a wave of resignations among Tory MPs should Mr Johnson – who was forced out amid a series of scandals only six weeks ago – win a second spell as the party’s leader.

Such an outcome might even trigger an early general election at a time when one opinion poll has put the Tories a staggering 39 points behind Labour, their lowest-ever rating.

Only around 35 MPs would be needed to ditch their support for the Government in a Commons confidence vote to bring down the Tory administration and pave the way for a snap election.

Some Tories have recently expressed fears – amid the current economic turmoil and their party’s poor polling with voters – an election defeat could see them out of power for ‘a generation’.

The prospect of a comeback by Mr Johnson is being fiercely contested by the ‘centrist’ wing of the Conservative Party.

One opinion poll has put the Tories a staggering 39 points behind Labour, at their lowest-ever rating 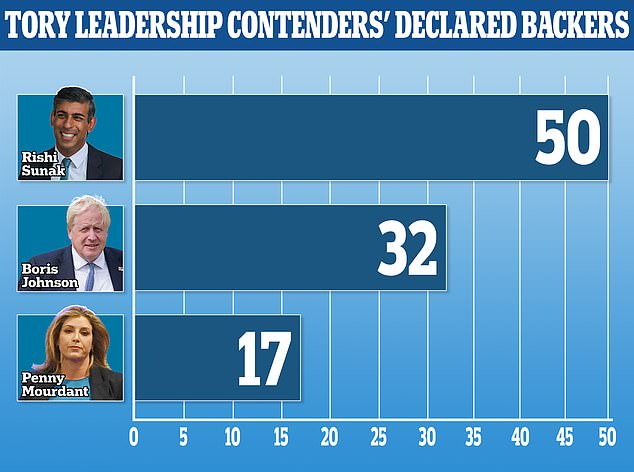 According to a ConservativeHome tally, Rishi Sunak is the current front runner with 50 openly declared backers among Tory MPs, while Boris Johnson has 32 and Penny Mordaunt 17 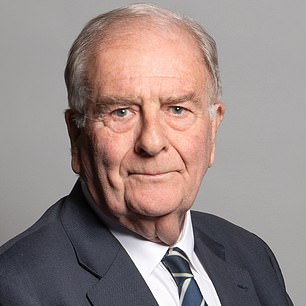 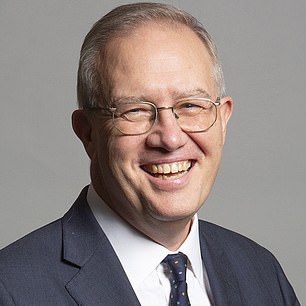 Veteran backbenchers Sir Roger Gale (left) and John Baron have both suggested they would resign the Tory whip, if the former Prime Minister were to make a shock comeback

Who do you want to be the next Prime Minister?

Sir Roger, a long-time critic of the former PM, has urged fellow Tories to ‘remember’ that Mr Johnson is still being investigated by a parliamentary committee over claims he lied to MPs about Partygate.

‘Until that investigation is complete and he is found guilty or cleared, there should be no possibility of him returning to Government,’ Sir Roger posted on Twitter.

The North Thanet MP also warned of a wave of resignations among Tory MPs, should Mr Johnson return as leader.

‘I think that there would be people, indeed like myself, who would find ourselves in the awful position of having to resign the Conservative whip,’ he told Times Radio.

Mr Baron, MP for Basildon and Billericay, also threatened to quit the Tory whip if Mr Johnson were to become PM again.

Simon Hoare, MP for North Dorset and chairman of the Commons Northern Ireland committee, insisted Mr Johnson had made ‘too many mistakes’ to be allowed to return.

‘My sincere anxiety/fear is that Boris Johnson simply has too much baggage and “history” to ever allow the country, Government and Party to move on and look forward,’ he posted on Twitter.

‘He made too many mistakes. We need a new, fresh chapter.’

Mr Hoare is among those MPs backing former Chancellor Rishi Sunak for the Tory leadership.

‘But choosing Boris now would be — and I say this advisedly — an absolutely catastrophic decision.’

Other MPs are also making private threats to resign the Tory whip – or even defect – should Mr Johnson return.

‘The party will rip itself to shreds under Boris,’ one MP who was formerly loyal to Mr Johnson told Politico. ‘MPs are already saying they’d defect or resign the whip. It just won’t wash.’

Another MP told the website: ‘I will stop Boris at all costs. If he wins, it means the end of the Conservative Party.’

A new poll by PeoplePolling put Labour on 53 per cent – a 39 points ahead of the Tories, who slumped to 14 per cent.

If the Tories were hit by a wave of resignations by unhappy MPs, they could see their Commons majority whittled away in a series of by-elections.

Alternatively, if those disgruntled MPs decided to stay in the Commons as independents, Labour leader Sir Keir Starmer could be encouraged to follow up on his demands for a general election by tabling a no-confidence vote.

If he, as the leader of the opposition, were to do so, convention means the Government is obliged to provide parliamentary time for the motion to be debated.

If the Government loses it could trigger a general election.