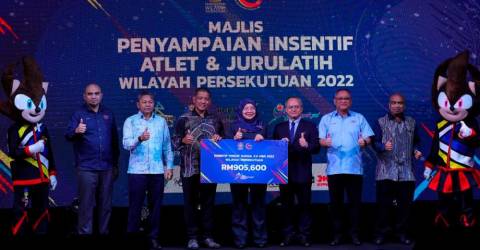 PUTRAJAYA: Some 358 athletes and coaches from the Federal Territory (WP) were rewarded to the tune of RM1,095,700 in incentives, following excellent achievement at games and tournaments throughout the year.

Rosida said the incentives were a token of appreciation and recognition for sacrifices made by the WiPers, regardless of whether they were under the National Sports Council (MSN) Podium Programme.

“Recalling the achievements of WiPers throughout this year, I am happy that many athletes succeeded in promoting the name of WP (FT) and Malaysia at local and international tournaments,” she said after the presentation of 2022 FT Athlete and Coach Incentives at Dewan Sri Siantan here today.

Another grateful athlete was weightlifter Muhammad Erry Hidayat who won bronze at the 31st SEA Games and a gold medal in Sukma. – Bernama