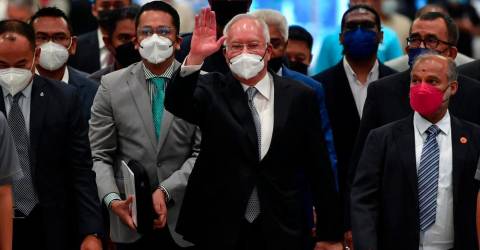 KUALA LUMPUR: A witness told the High Court here today that she was unsure if the process involving the issuance of a letter of support (LOS) for the RM1 billion loan application submitted by 1Malaysia Development Berhad (1MDB) to the Finance Ministry (MoF) was brought up in Parliament.

However, Siti Zauyah said she was not sure if the same had been done for the application by 1MDB, a company wholly owned by the Minister of Finance Incorporated (MoF Inc.)

She said this when cross-examined by lawyer Wan Aizuddin Wan Mohammed who was representing former prime minister Datuk Seri Najib Tun Razak at the trial involving the misappropriation of RM2.3 billion from 1MDB.

Wan Aizuddin then referred Siti Zauyah to her witness statement that stated that the MoF had no information whatsoever for due diligence to be conducted for the issuance of a LOS and that it was processed based on the instruction of Najib, who was also Finance Minister then.

Wan Aizuddin: So what was the basis of your statement? Something must have happened or there must have been a specific document for you to make such a statement.

The witness, however, did not answer the question.

Wan Aizuddin then referred to the addition made by Siti Zauyah in her witness statement, where she stated that she had applied to obtain documents related to 1MDB from the Prime Minister’s Office, but had not received any response.

Siti Zauyah, however, denied making such a statement, adding that she had only requested documents from 1MDB and not from the Prime Minister’s Office.

“I deal with the Prime Minister’s Office but not ‘directly’. I was only in contact with the late Datuk Azlin Alias ​​(former principal private secretary to Najib),” she said.