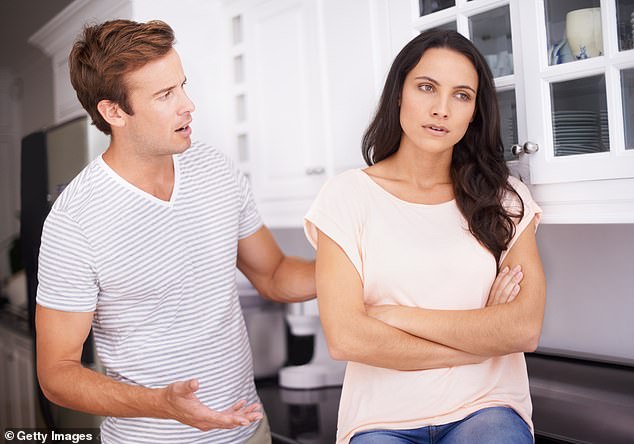 By Maria Chiorando For Mailonline

A woman has sparked a debate online after asking people what they would do if their husbands had a lap dance.

The anonymous woman, thought to be UK-based, revealed on parenting forum Mumsnet that she was struggling with that dilemma herself.

The post, titled Husband had a private lapdance, said: ‘On a stag do. Says he was so drunk he hardly remembers it. He wasn’t the only one but all the others are single.

The poster revealed she was not really sure how she felt about the situation, which is why she was asking others for their opinions

‘Not sure how I feel about it tbh.

‘AIBU [am I being unreasonable?].’

Many respondents felt the poster was well within her rights to be annoyed, with one saying: ‘Nope you are NBU. I would be furious and reconsidering my future. For me personally it steps over a line. I’m sure he wouldn’t be happy if you had a d*** swinging away in front of you would he.’

Another appeared to feel equally strongly, writing: ‘Unforgivable imo. How would you feel if he’d done exactly the same thing with a woman he’d met at work or down the pub? How is this different?’

And a third chimed in saying: ‘He paid for a woman’s body. I wouldn’t hang about.’

However, some took a totally different approach, saying they would be unfazed by their husband having a lap dance.

One wrote: ‘I couldn’t get upset about this. It’s a tradition for stag dos and it would’ve been his friends who arranged it anyway. Definitely not a LTB situation as a lot of posters like to claim on here.’

Another added: ‘I would be unimpressed but nothing more. I wouldn’t consider it cheating. I would move on the same day.’

And a third wrote: ‘This wouldn’t upset me as long as they told me. Although I see why it could upset some people. U can’t help how it makes u feel; is it something you had discussed before the Stag do?’

Other posters pointed out that their opinion was irrelevant in this situation, and that the only important view was the poster’s.

One wrote: ‘Absolutely does not matter what other people think. Are you annoyed? Do you think less of him? He couldn’t have been that drunk that he ordered and paid for a dance. If you’re both happy with each other paying for someone to erotically dance for them, then it’s not really a problem.’

Another added: ‘What is important is how you feel about it. How you are as a couple and what your ideas and values are. Though of course it’s understandable that you have reached out to help you understand how you feel about it! Try and listen to your feelings and take time to work through them. Best of luck to you either ways.’

A further respondent wrote: ‘My husband had a private dance(s) at his stag and I dare say also when he’s been on other people’s stags. It doesn’t bother me in the slightest. It’s just not something that really registers with me.

‘Having said that – mine is a minority view; most of my friends would be very upset about it (which to my mind is ridiculous but to each their own).

‘So my point is- it doesn’t really matter what anyone else thinks. He’s your husband and so it’s your personal feelings that you need to listen to x’ 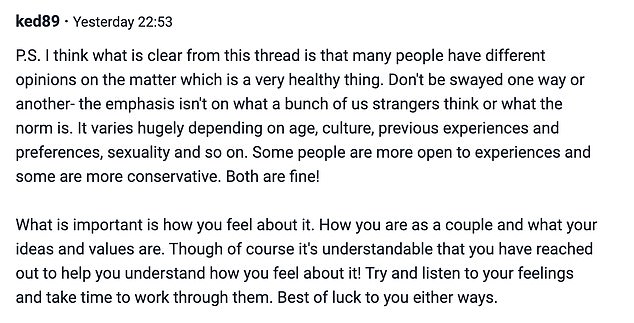 Several respondents pointed out that other people’s views were not particularly helpful in this situation, and that the poster had to think about how she alone felt about the situation