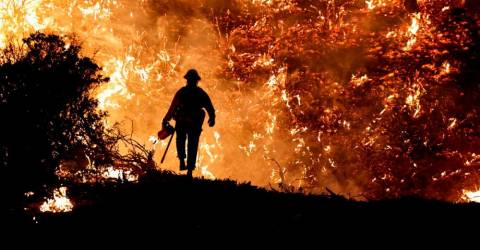 ANKARA: While various parts of the world experienced large-scale wildfires and heat waves, many regions recorded their hottest summer ever, Anadolu Agency reported.

According to the latest data from US’ the National Oceanic and Atmospheric Administration (NOAA), Europe and China recorded their hottest summer in history, while Northern Hemisphere saw the second-hottest summer.

Meanwhile, this summer was recorded as the second-hottest for North America and Asia, and the fifth-hottest for Earth since 1880, according to a report released by the administration’s National Centres for Environmental Information (NCEI) on Wednesday.

NASA also ranked this summer period as tied with 2019 for the warmest on record globally.

NOAA also found that August was the planet’s sixth-warmest one on record and the warmest August over Northern Hemisphere land areas.

Earlier this month, the EU’s Earth observation satellite program said that this summer has been the hottest in Europe’s recorded history, with August seeing a record high temperature.

“In Europe, the average temperature in August was the highest on record for both the month of August and the summer (June-August) as a whole,“ added the Copernicus Climate Change Service.

On Aug 31, France’s weather bureau termed this year’s summer season the second hottest in the last century. Hungary reported 2022 as the hottest summer in 121 years, with median temperatures reaching 22.8C on Sept 5. – Bernama