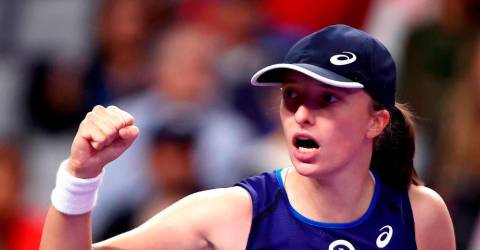 BRISBANE: World number one Iga Swiatek (pix) said Wednesday she will put a breakthrough 2022 season behind her to concentrate on staying at the pinnacle of the women’s game.

The Polish star won eight singles titles, including the French and US Opens, in a stellar season that saw her take a commanding position at the top of the rankings, well clear of second-placed Ons Jabeur of Tunisia.

The 21-year-old inherited the number one spot with the shock retirement of Australia’s Ashleigh Barty in March, but has since made it her own.

“I’m going to try to kind of cut off everything that happened last year and just focus on the future, because I feel like I can take a lot of experience from these tournaments last year,“ she said ahead of the inaugural mixed-teams United Cup in Brisbane.

“I don’t want to really like hold on to that too much, because I want to go forward and kind of focus on my next goals.”

Swiatek admitted she had mixed emotions when she became number one after Barty’s retirement, not sure that she deserved it.

“At first I felt like I wasn’t sure if this is kind of my place to be,“ she said. “Ash, she seemed like a huge role model for everybody in terms of her behaviour on court but also off court so I felt like she really set the bar pretty high.

“I’m super proud of myself,“ she added. “I feel a huge satisfaction, because I have been working my whole life to get to this point. I didn’t really think it’s possible for me.

“Even right now I feel like there is a lot I can change and improve.”

Poland get their United Cup underway in Brisbane on Saturday against Kazakhstan with Swiatek taking on Yulia Putintseva in the opening rubber.-AFP