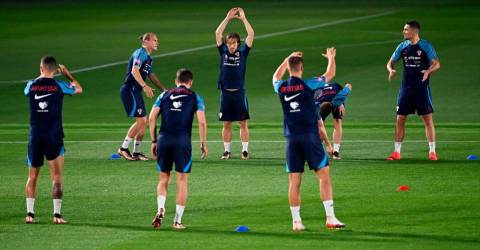 DOHA: Croatia say they thrive on being considered underdogs and warned on Saturday that they have what it takes to reach the World Cup final again.

Led by inspirational captain Luka Modric, unfancied Croatia reached the final four years ago in Russia before losing 4-2 to France.

Few are predicting an ageing squad will do as well in Qatar in the coming weeks — and that is just the way the players like it.

“We don’t put any extra pressure on ourselves and we don’t really care about these predictions,“ said striker Bruno Petkovic.

“We don’t listen to that or read that. We just need to take it step by step, we have our own goal and we are focused on that.

“At the end, we will see who was right in their predictions.”

Fellow forward Marko Livaja was similarly bullish, adding: “I think we have a really good chance to repeat something similar to what we did in Russia.”

Croatia begin their Qatar campaign on Wednesday against Morocco in a Group F, which also contains Canada and Belgium.

Along with Brazil, Argentina, Spain, England, Germany and holders France, the Belgians are one of the sides expected to go far at this World Cup.

Croatia still boast Real Madrid playmaker Modric and fellow veteran Ivan Perisic, but some say they lack the firepower to mount a serious challenge in Qatar.

“I’m used in my career that I’m not very liked by most media so I don’t really care about that,“ said Dinamo Zagreb’s Petkovic, who has scored six times in 23 matches for his country.

“I’m focused on improving myself and contributing to the success of the team,“ added the 28-year-old.

“I think we have excellent forwards. Maybe not all of us have a great international career or we’re not internationally recognised.

“But we have a lot of quality and I don’t think we need to be worried about our forwards.” – AFP