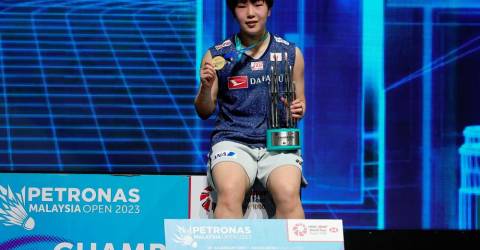 The victory saw the reigning world champion emerge as only the second Japanese to win the title in the 2023 edition after former Asian Games champion Hiroe Yuki’s feat in 1968.

In today’s exciting final in Axiata Arena, Yamaguchi bounced back from 12-21 down in the first, to deny Se Young the honour to become the first Korean by winning the remaining sets, 21-19, 21-11.

“Se Young played well in the first set, but I played better to beat her in the second and third sets as she got tired,” said Yamaguchi, who extended her winning record to 10 out of 15 matches against Se Young.

“I am so happy to win this title, after no Japanese player was able to win it for long. I don’t have any specific goal for this year, but want to play as best as can,” she added.

Meanwhile, Se Young was positive about continuing to learn and improve despite not being able to win the title for her idol Ratchanok Intanon of Thailand, who could not defend the title due to injury.

“This is the first tournament of the year, though I can’t win it, being in the final is good. Great start for the year,” she said.