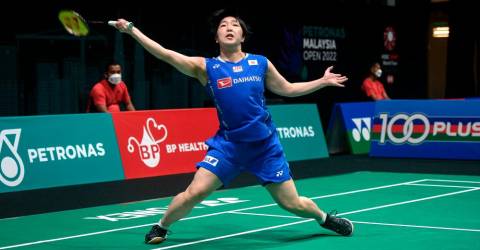 KUALA LUMPUR: The 2022 Malaysia Open Badminton Championships commenced with what could be the tournament’s biggest upset, as the women’s world number one Akane Yamaguchi was ousted by Indonesian Gregoria Mariska Tunjung in the first round.

The 25-year-old Japanese was stunned by a straight-set 14-12, 14-21 defeat to Gregoria in the opening match that lasted for 27 minutes at the Axiata Arena here.

It was only Yamaguchi’s second defeat to the 22-year-old former World Junior Champion in 10 meetings, with the first being their first match at the 2018 Asian Games team event in Jakarta.

Speaking to the reporters after the match, the reigning world champion Yamaguchi admitted that was in disbelief that she lost the match.

“She was very focused…I still can’t believe I lost this match,” she said through an interpreter.

Since winning the All England in March, the Japanese shuttler has yet to win a title with her best performance being the second-place finish in the Asian Championships.

“Maybe I got the advantage because she failed to give it a fight in the first set, maybe she wasn’t ready, while in the second set, I just had a good start.

“I did not have any specific target here, just taking a step-by-step approach and playing better than in my previous tournament,” she said.

In the second round, Gregoria is set to face the winner between two Chinese players, Wang Zhi Yi and He Bing Jiao. — Bernama