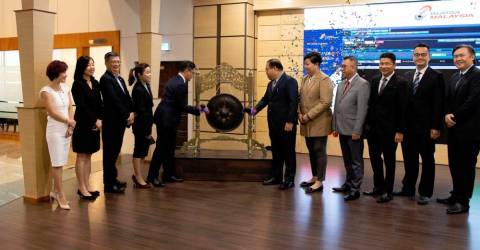 KUALA LUMPUR: Yew Lee Pacific Group Bhd made its debut on the ACE Market of Bursa Malaysia Securities this morning, opening at 28.5 sen per share above its initial public offering (IPO) price of 28 sen per share, chalking up a 0.5 sen or 1.79% premium.

The Perak-based group is an industrial brush manufacturer and trader of machinery parts and industrial hardware.

Chairman Mahdzir Othman said the group is pleased with the positive response on its debut on the ACE Market and that it will continue to strengthen its market position as one of the key industry players in the industrial brush industry in Malaysia.

Currently, the group has an estimated market share of 12.4% of the total size of the industrial brush industry in Malaysia of RM254.5 million in 2021, based on its revenue from the manufacturing of industrial brushes segment of RM31.6 million during the financial year ending Dec 31, 2021 (FY21).

“We see this listing as an opportunity to realise our future plans and strategies including expansion and upgrading of our production facilities as well as developing a range of customisable industrial brushes catering to a diverse customer base.

“As such, we have also allocated RM3.6 million from our IPO to make advance purchases on materials to support the increase in our manufacturing activities in tandem with the rise in demand of our range of brushes. This will improve our inventory and availability levels and shorten overall lead time for delivery. The purchase of additional machinery and equipment is also to automate production processes and reduce labour costs,” said Mahdzir.

COO and executive director Ang Poh Yee said the group is confident that its results for FY22 will reflect stable profit margins and growth in the revenue. It recently declared a first interim dividend of 0.3 sen per share in respect of FY22 to be paid on July 12, 2022.

“(Our) Sales volume has stabilised since the last quarter,” Ang told a virtual press conference following its listing today, when asked whether the group’s sales order were consistent.

Meanwhile, the group plans to automate more of its operations to reduce dependency on labour and intends to expand market share in the trading of machinery parts in the central region of Peninsular Malaysia as well as have a bigger presence in Indonesia and Thailand through Yew Lee Indonesia and Yew Lee Thailand, both of which were established in 2019.

“Moving forward, for both of our branches Yew Lee Thailand and Yew Lee Indonesia, we are hoping to expand the area first by doing the sales and trading parts of the offices then moving forward if there are opportunity to venture into manufacturing of the brushes in both of the countries.”