Tony Blair raises a foamy pint in the Trimdon Labour Club where he would celebrate his election victories in Sedgefield. Last night the County Durham constituency fell to the Tories 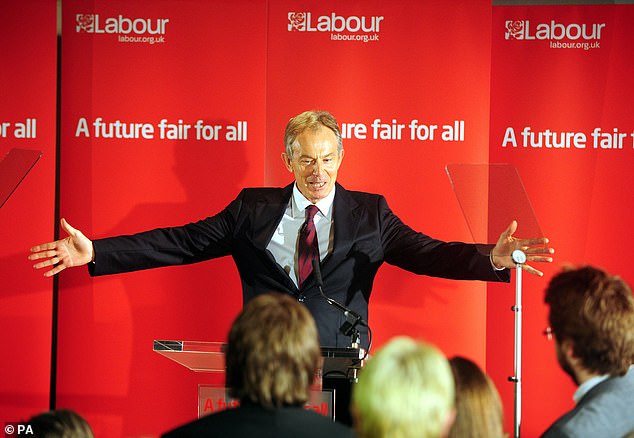 Once upon a time, this place was the epicentre of successive Labour landslides. After every election victory, Tony Blair would come straight here to Trimdon Labour Club to celebrate with his Sedgefield constituents before heading down to London to see the Queen and form another government.

They still talk about the day that the barmaid answered the phone and yelled across the bar: ‘Where’s Tony? It’s some bloke called Clinton!’

No one is pulling pints here anymore. And the only callers are people planning home improvements, not world leaders. For Trimdon Labour Club has recently been converted into a carpet shop and warehouse.

Yet if this was an omen of changing Labour fortunes in these parts, few people ever seriously expected the off-the-Richter-Scale political earthquake which took place here in the early hours of yesterday morning.

For Sedgefield – the one-time mining heartland where Tony Blair luxuriated in a Labour majority of more than 25,000 – is now a Tory seat.

Scenes like this – deemed unimaginable just a few years ago – have come to pass across the North of England.

That Boris Johnson now commands all he surveys is entirely down to the collapse of the ‘Red Wall’ – former Labour strongholds like this one that found themselves utterly detached from the neo-Marxist, spendaholic, Europhile, uber-woke London-luvvie Labour Party under the leadership of a teetotal, vegetarian fan of Hamas.

Today, the only substantial wall still standing is the one that the Emperor Hadrian knocked up to the north of here in about 122AD.

I spent yesterday travelling through what we can now call the Red Rubble of the North East. 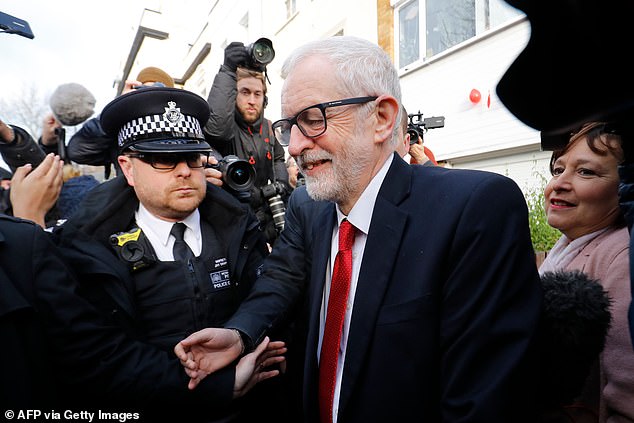 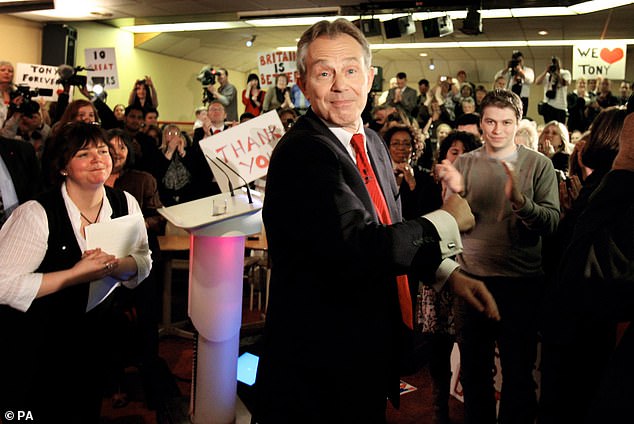 ‘We knew things were looking good when, day after day, we’d be getting these positive responses even in the strongest Labour areas,’ she told me.

Polling day started with one drama – her rescue puppy, Carter, escaped from a committee room near Staindrop and disappeared across open fields for two hours – and ended with a rather different one.

‘I have to admit I never expected a majority of 8,000,’ she said, still a little stunned.

If these new MPs remained endearingly startled by their own success, I have to say the voters did not seem terribly surprised.

‘How could anyone vote for a man like Corbyn? He’d have cut the Forces and we might have lost the NHS,’ sighed lifelong Labour voter, Craig Watson, a van driver whom I met yesterday morning shortly after stepping off the train at Darlington – now proudly represented by a new Tory MP.

Having spent nine years in the RAF, Mr Watson could not imagine anyone letting Mr Corbyn take charge of Brexit negotiations, let alone the military.

It’s a short drive to Sedgefield, a blend of farmland in the south and former pit villages in the north. I met Charles Johnson, the Tory agent for Sedgefield, who has campaigned here for half a century.

He still remembers the lonely trudge around the doorsteps during the Blair years when a Conservative was more likely to be struck by lightning than returned to Parliament.

Yesterday, he had the thrill of seeing Sedgefield, at long last, falling to his candidate in the form of Paul Howell, a local borough and county councillor.

‘I can honestly say that my political life is now complete,’ said a modest but very proud Mr Johnson. ‘It’s certainly been an emotional night.’ 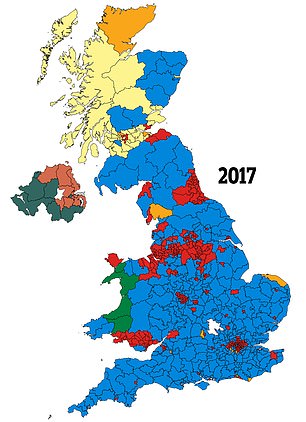 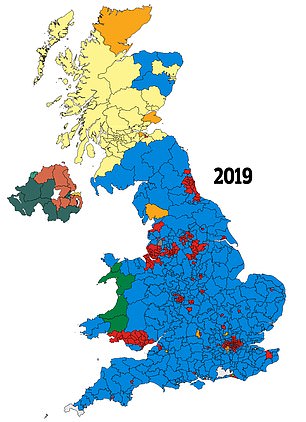 At Paul Howell’s house, I found the new MP still coming to terms with it all over a cup of very strong coffee. I asked him what his priorities would be at Westminster. ‘As a new MP…’ he began, and then stopped. ‘That does sound rather good doesn’t it?’ he said, still taking it in.

Born and bred in his constituency, where he used to run the accounts for a local manufacturing business, Mr Howell sees his election as the latest on a slow but steady upwards Tory trajectory across the region.

He points to key moments like the election of a Tory mayor in the once solidly Labour Tees Valley and ex-Chancellor George Osborne’s talk of a ‘Northern Powerhouse’.

It certainly feels like one now. Out on the stump, he said, he had never once felt uncomfortable wearing a blue rosette, even in the old mining areas like Trimdon where a visceral hatred for Margaret Thatcher was trumped by an overwhelming local enthusiasm for leaving the EU. The voters all had the same concerns – Brexit and Corbyn,’ said Mr Howell.

On that point, he was in complete accord with John Burton, the man who spent more than 20 years here as Tony Blair’s election agent.

‘We could probably have coped with one or the other but not both. First, there was Brexit and the fact our MP was for Remain, bless him. Second was Corbyn. People didn’t like his connections with the IRA and they didn’t feel secure with him in charge.’ His solution? A new ‘centre party’.

We met outside the former Labour Club, scene of so many bygone triumphs. Mr Burton talked of the day that President George W Bush dropped in to Trimdon by helicopter to see the Blairs. ‘My wife made him a cup of tea and he wrote her a very nice letter,’ he recalled.

I talked to local residents like Derek Booth, manager of Direct Carpets, who also recalled the Bush visit. ‘I provided the carpet for the helicopter landing pad and I never got paid. He still owes me 80 dollars!’

A Labour voter in the Blair years, he was withering in his contempt for the party now.

‘What have they done for this area? Nothing at all.’ 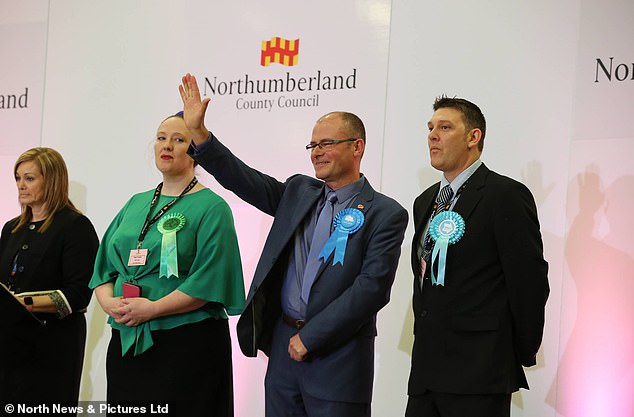 For millions of television viewers, it was the scene in Blyth Valley shortly before midnight on Thursday that confirmed Labour’s worst fears (Conservative Ian Levey waves after winning the seat)

For millions of television viewers, it was the scene in Blyth Valley shortly before midnight on Thursday that confirmed Labour’s worst fears, sent Tory hearts soaring and reassured the rest of the country that, henceforth, we will hear no more Leftie chants of: ‘Oh, Jer-emy Cor-byn.’

This was an especially troubling result for the Corbynistas. Not only had a Tory won an old Labour citadel like Blyth, but the blasted candidate was an NHS worker.

‘I love the NHS and I am now going to be its champion at the highest level,’ said Ian Levy, who has spent 30 years here as a mental health nurse. He told me that his lowest moment of the entire campaign was when some Labour charmer had defaced his posters with the words: ‘NHS Traitor’.

He attributed his victory to his beloved wife, Maureen. ‘One day, she heard me complaining about the state of the town yet again and said: “Either do something about it or shut up.” So I got involved.’

This was his third attempt in Blyth and he had firm words of advice for Conservative Central Office: Choose local candidates and don’t give up if at first you don’t succeed.

Over in Bishop Auckland, Dehenna Davison was taking another phone call. It was an official at the House of Commons explaining how, when and where to enrol as a new MP.

‘I don’t think I’ll finally call myself an MP until I have been sworn in,’ she laughed. This has been a hell of a week for a young woman whose first election, just a few years back, was for head girl of Sheffield High School (which had spotted an early talent and gave her a means-tested scholarship).

‘I came fourth in that one!’ she laughed. In her victory speech, she thanked two of the great influences in her life, her father, who died when she was 13, and her grandmother who died in 2015.

Though her mother had been too unwell to attend Thursday’s count, she had been waiting up to watch it on television.

‘Writing that speech was really a very emotional moment for me but I wanted to remember the key drivers in my life and do them proud,’ said Miss Davison.

The politics graduate – whose previous jobs have included being a waitress, working in a bookies’ shop and running a software startup – has surely done that. Now, she becomes one of Westminster’s youngest MPs and the poster girl of the new-look Tory Party.

Is this a blip or is it the start of a new Blue Wall across the North? As of now, the foundations are certainly there.