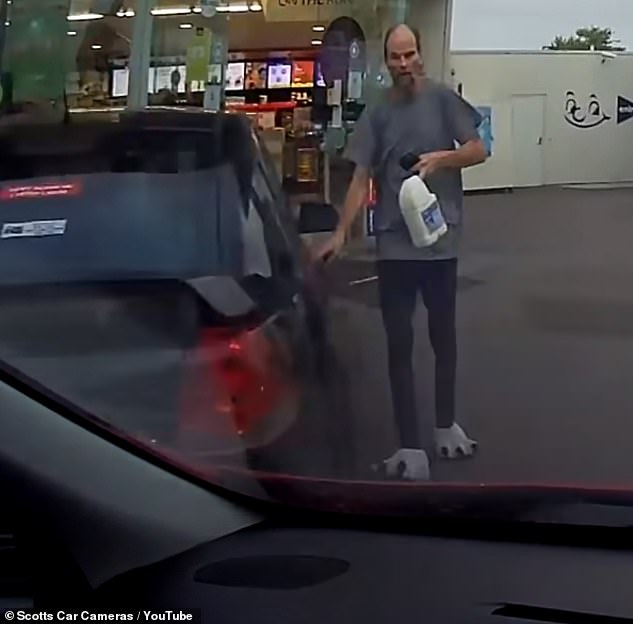 A Holden Commodore driver accused of parking in a disabled spot has gone viral online for his peculiar choice of footwear.

Footage shared on YouTube as part of the latest Bad Driving Australia compilation begins with a motorist pulling up in the car park at a service station in Adelaide on January 13.

A woman in the car notices the vehicle parked next to them is in a disabled spot but doesn’t have a permit sticker attached.

The woman is heard questioning the male driver about to enter the store.

‘Excuse me, do you have a disabled sticker? I don’t see it,’ she asks the man.

The footage zooms in on a man donning a pony-tailed mullet and strange white footwear pointing at his car as he enters the service station to buy milk.

The VE Holden Commodore is still parked in the spot as the other car reverses out a few minutes later.

The driver is seen leaving the store and approaching his car, as viewers get a closer glimpse of his fancy footwear which appear to have large webbed toes.

‘Wait a minute. WTF!’  the footage is captioned.

The internet has since gone into meltdown over the footage as baffled online viewers mocked the driver’s footwear fashion.

‘He may not have a disabled sticker but look at his shoes,’ one man commented.

Another quipped: ‘Ohh, I see his disability now… he’s an SA bogan!’

Other viewers jokingly came to the defence of the driver.