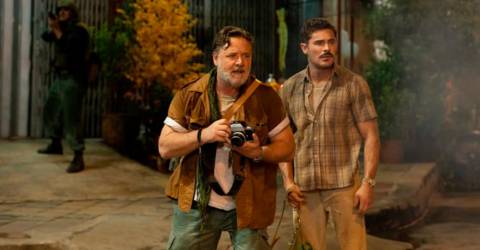 IN the sweeping new trailer for The Greatest Beer Run Ever, Zac Efron embarks on the adventure to deliver beers to troops during the Vietnam War.

The film depicts the true story of John ‘Chick’ Donohue (played by Efron), a U.S. Marine Corps veteran who secretly travelled to Vietnam on this outlandish mission. As he faces the challenges of the fractious war and reunites with childhood friends, his well-intentioned journey turns into the experience of a lifetime.

The film, directed by Peter Farrelly (Green Book), is based on Donohue and J.T. Molloy’s book The Greatest Beer Run Ever: A Memoir Of Friendship, Loyalty, and War.

Joining Efron in this unique tale will be Russell Crowe as war photographer Arthur Coates, who accompanies Donohue on his journey, as well as Jake Picking, Will Ropp, Archie Renaux, Kyle Allen, and Bill Murray.

“When I met with Zac, what struck me was he was at a very interesting place in his career,“ Farrelly told People magazine. “He said, ‘I really want to do something different.’ And what he does here, in my eyes, is that.”

The Greatest Beer Run Ever will have its world premiere at the 2022 Toronto International Film Festival before hitting theatres and Apple TV+ on Sept 30.