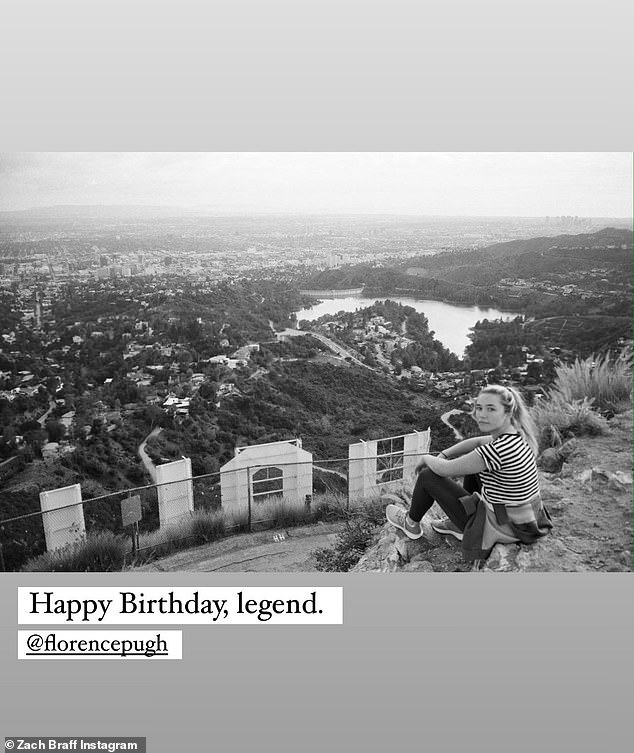 Despite the fact that they announced their breakup five months ago, Zach Braff didn’t forget his ex-girlfriend Florence Pugh’s birthday this year.

The Scrubs star, 47, took to his Instagram Stories to share a snap of the Don’t Worry Darling actress as she turned 27, and wrote, ‘Happy birthday, legend.’

The black and white photo featured the British star sitting on the slopes of Mount Lee in Los Angeles, looking over the Hollywood sign, with a fantastic view of Tinseltown behind her.

‘Legend’: Zach Braff, 47, took to his Instagram Stories on Tuesday to wish his ex Florence Pugh a happy 27th birthday, as he shared a snap of the actress and wrote, ‘Happy birthday, legend’

Pugh announced she and Braff split up after three years together last year, in an August interview with Harper’s Bazaar, where she said they went their separate ways earlier that year.

The pair worked to keep their relationship out of the public eye, with Florence saying they wanted to break up in private.

She said: ‘We’ve been trying to do this separation without the world knowing, because it’s been a relationship that everybody has an opinion on.’ 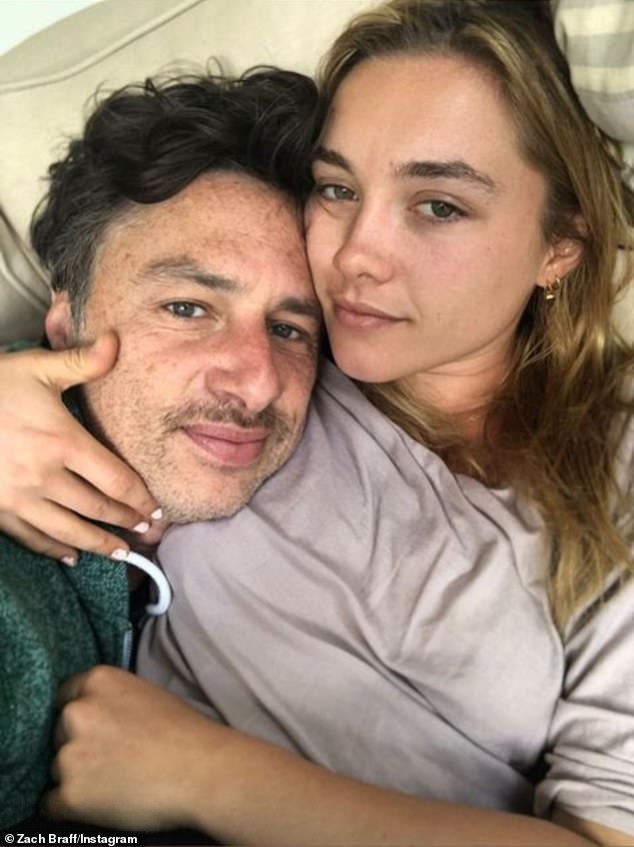 Friendly: Pugh announced in August of 2022 that she and the Scrubs star split up earlier that year, after three years together

‘We just felt something like this would really do us the benefit of not having millions of people telling us how happy they are that we’re not together. So we’ve done that. I automatically get a lumpy throat when I talk about it.’

Florence did not reveal when exactly she and Zach broke up, but they were still together in April when she wished him a happy 47th birthday on Instagram.

The 21-year age gap between the pair drew attention during their three-year courtship.

In 2021, Florence spoke to The Sunday Times about the cruel comments she received from trolls after wishing Zach a happy 46th birthday. 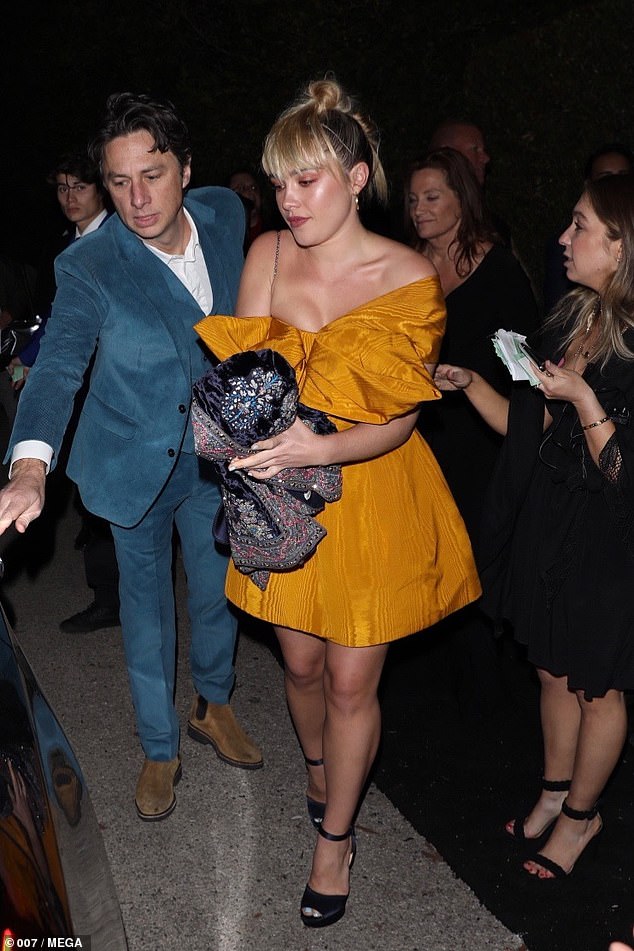 Age difference: Throughout their union the couple battled negative comments about their their 21-year age gap. ‘I think it bugs people that it’s not who they expected,’ Florence said; Pictured 2020

She said: ‘I think it bugs people that it’s not who they expected. But it’s my life and I’m not doing anything to please people or to make it a better headline or story. I want to also be a person!’

Prior to their split, Florence and Zach were working on the film A Good Person together, which he directed.

The premise of the feature follows Pugh’s character, Allison, ‘whose life falls apart following her involvement in a fatal accident,’ according to an IMDB synopsis. 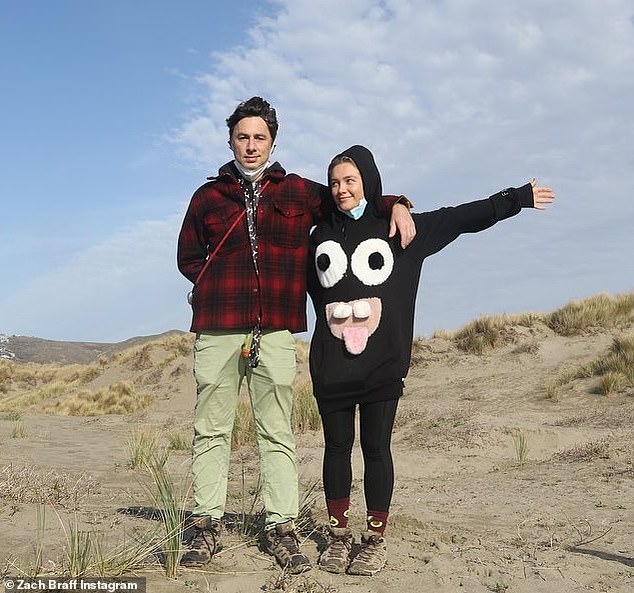 Careers: Prior to their split, Florence and Zach were working on the film A Good Person together, which he directed

Moving film: Florence was cast alongside Oscar winner Morgan Freeman. The film is set to premiere in March 2023

A Good Person is set to premiere in March 2023, and also cast Oscar-winner, Morgan Freeman, to take on the other leading role.

Zach sang Florence’s praises during the production of the project, calling her ‘one of the best actresses working’ today.

The couple first met on the set of his short film In the Time It Takes to Get There, and they first ignited romance rumours in April 2019 when they were spotted holding hands, but neither confirmed anything until the following December. 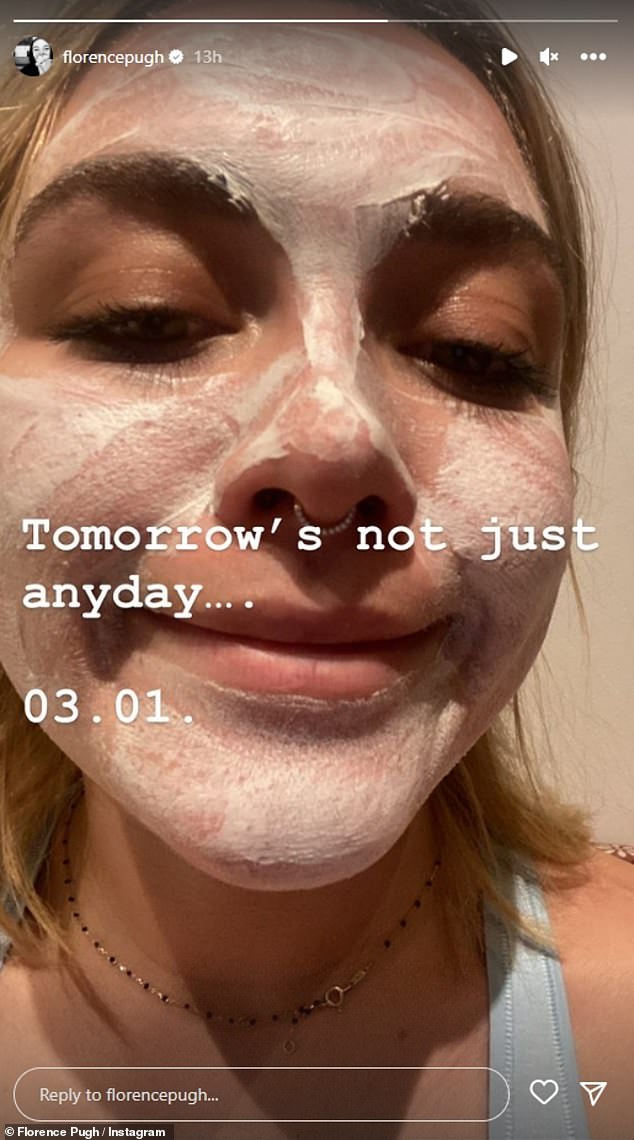 Special day: Florence celebrated her birthday as her fans declared it an ‘international holiday’

Florence celebrated her birthday earlier in the day, as her fans declared it an ‘international holiday.’

The Oscar-nominated actress took to her Instagram on Monday to remind fans of her birthday with beaming selfie, while sporting a face mask. 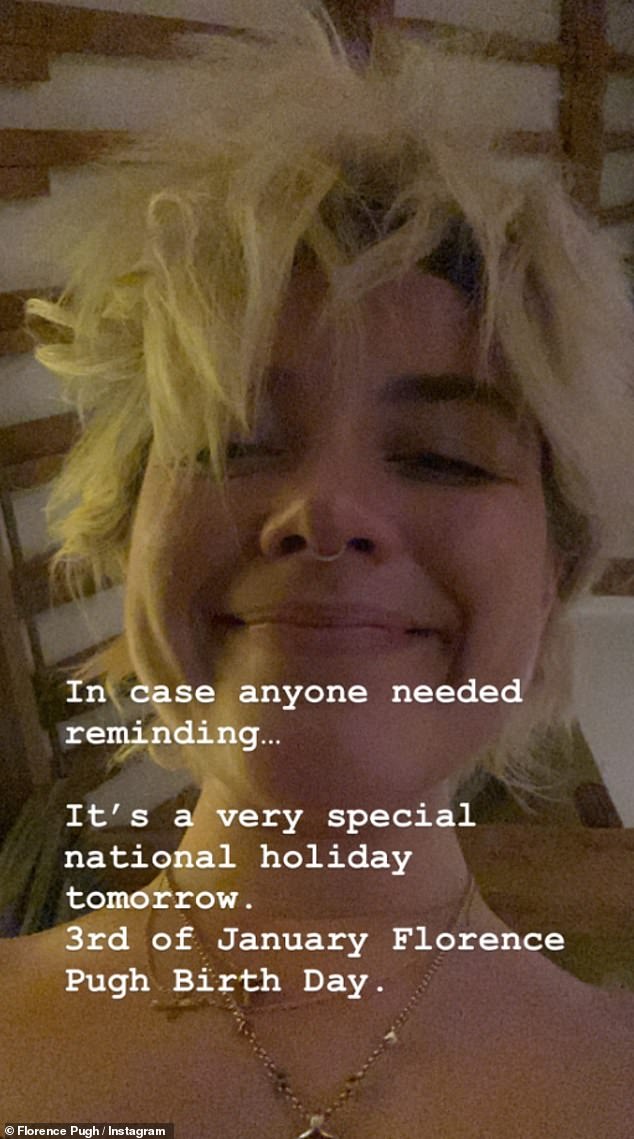 Holiday: Florence has encouraged her fans previously to celebrate ‘National Florence Pugh Day’ with special reminders for the past four years

Florence has encouraged her fans previously to celebrate ‘National Florence Pugh Day’ with special reminders for the past four years.

And her followers took up the challenge, taking to Twitter to celebrate by sharing photos of the Little Women star and watching her filmography, so much so that her name was soon trending.

One fan wrote: ‘Happy Florence Pugh birthday to all the girls, gays, and theys who celebrate’.

Another echoed: ‘It’s florence pugh birthday & it’s a special international holiday hello give me my day off @ work’. 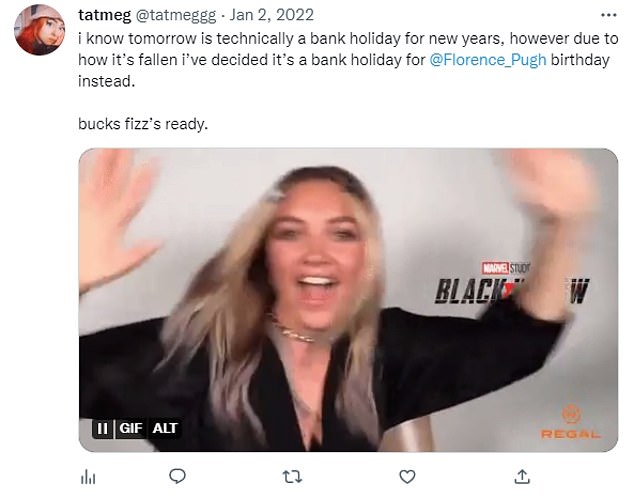 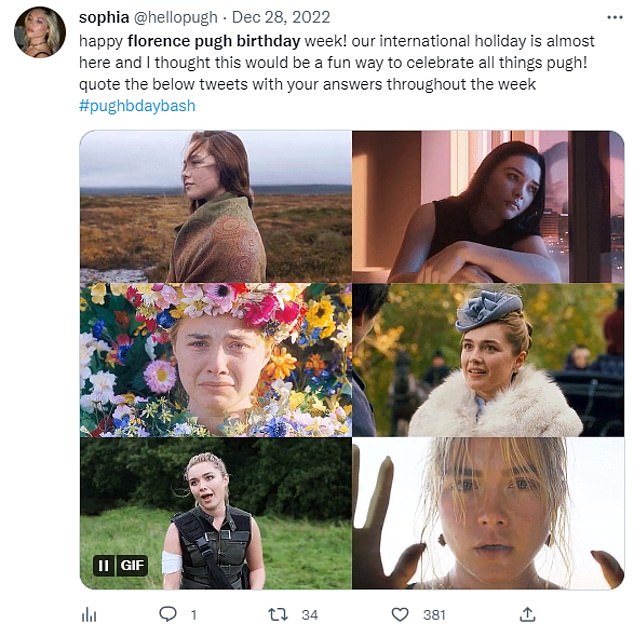 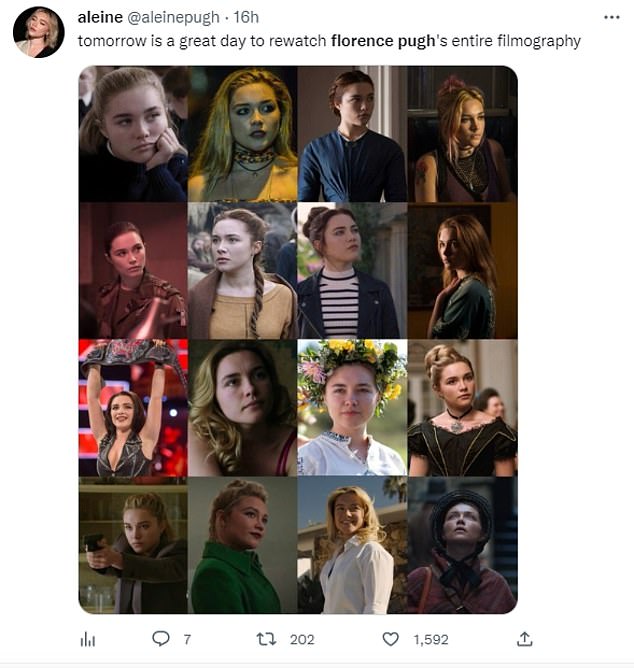 The actress is set to appear in Dune: Part Two along with other talented cast members such as Timothee Chalamet and Zendaya. The film is slated to premiere in theaters in November 2023. 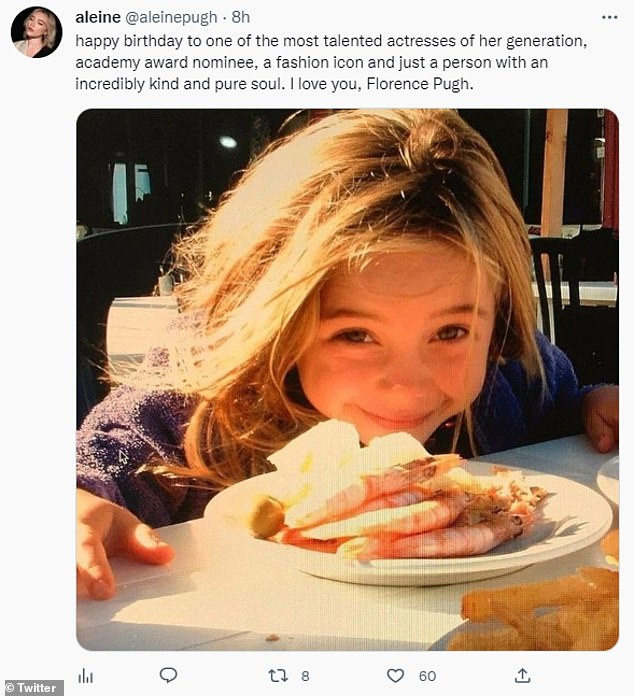 Trending: And her followers took up the challenge, taking to Twitter to celebrate by sharing photos of the Little Women star and watching her filmography, so much so that her name was soon trending