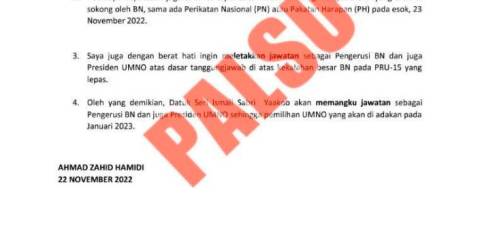 KUALA LUMPUR:- Datuk Seri Ahmad Zahid Hamidi today denied that he will step down as Barisan Nasional (BN) chairman and Umno president Umno as alleged in a media statement that went viral on social media.

In a posting on his official Facebook page, Ahmad Zahid said the viral media statement was a hoax and was fabricated by an irresponsible party.

The statement bearing the BN Malaysia letterhead dated Nov 22 claimed that an urgent meeting was held among the BN component party leaders yesterday to decide on several matters including the coalition they will support to form the new federal government.

The statement also said that Ahmad Zahid wished to resign from his two party posts following BN’s dismal performance in the 15th General Election (GE15), and leave it to Datuk Seri Ismail Sabri Yaakob to assume the duties until the party polls in January 2023.