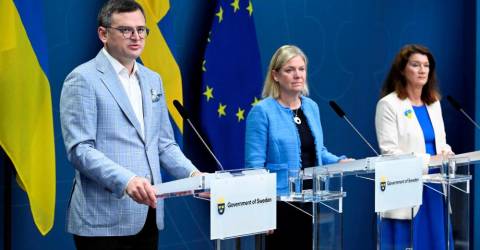 “This mission will be the hardest in the history of the IAEA, given the active combat activities undertaken by the Russian Federation on the ground and also the very blatant way that Russia is trying to legitimise its presence,“ Kuleba said during a visit to Stockholm.

IAEA chief Rafael Grossi said Monday he and his team were on their way to Europe’s largest nuclear power plant, which has been the target of strikes in recent weeks, and would arrive later this week.

Speaking at a joint press conference with Swedish Prime Minister Magdalena Andersson and Foreign Minister Ann Linde, Kuleba said “Russia is putting not only Ukraine but also the entire world at threat of risk of a nuclear accident”.

He demanded that Russia leave the plant.

“We expect from the mission a clear statement of facts of violation of all nuclear safety protocols.

“Russia must go and the IAEA as well as many countries of the world, we have to make them go, it’s as simple as that. This is the only way to ensure nuclear security,“ Kuleba said. – AFP