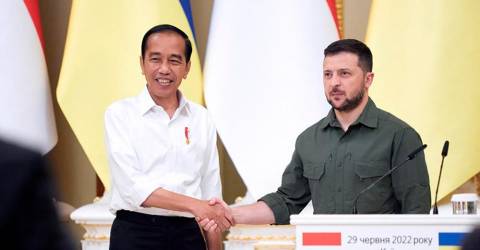 KYIV: Ukraine’s President Volodymyr Zelensky on Wednesday told Indonesia’s visiting President Joko Widodo that he will attend the upcoming G20 summit in Bali depending on who else is attending.

“Certainly I accept the invitation. Ukraine’s participation will depend on the security situation in the country and on the composition of the summit’s participants,“ Zelensky said following their talks in Kyiv, in an apparent reference to Russian President Vladimir Putin’s attendance.

Widodo was in Kyiv Wednesday before heading to Moscow to meet Putin, who on February 24 sent troops into pro-Western Ukraine.

Indonesia, like most major emerging economies, has tried to maintain a neutral position and has called for a peaceful resolution to Russia’s months-long offensive in Ukraine.

Indonesia holds the rotating presidency of the G20 this year and Jakarta has come under Western pressure to exclude Russia’s president from the gathering after announcing in April he had been invited.

G20 nations make up about 80 percent of total world economic output, while the G7 contributes about 31 percent.

Putin joined last year’s G20 summit in Rome in October via videoconference, due to the coronavirus crisis.-AFP