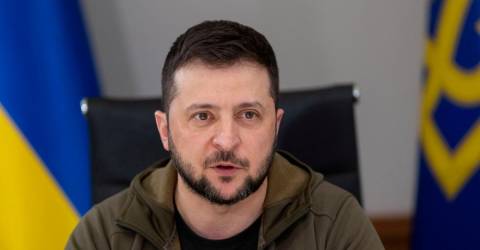 KYIV: Ukraine’s President Volodymyr Zelenskyy said Wednesday that he cannot tolerate the uncertainty in Europe over the sanctions against Russia and called for further sanctions.

According to Anadolu Agency, the Ukrainian president addressed the Irish parliament and accused Russia of targeting Ukraine’s agricultural sector and using hunger as a weapon.

“Our new fuel storage depot was hit by Russia,” Zelenskyy said in his historic address. “They are destroying things that are sustaining livelihoods to people – fuel storage, food storage, agricultural equipment, mining fields.

“They have also blocked all of our seaports together with vessels which had agricultural cargo for export. Why are they doing this? For them, hunger is also a weapon, a weapon against our ordinary people, an instrument of domination.”

Ukraine is a major exporter of foodstuffs such as wheat, corn, and sunflower oil.

He said Ukraine was one the leading food supplying countries in the world, and that “more than a dozen countries will have shortages – this is the reality for millions of people who are hungry, especially in Northern Africa”.

It added that the Ukrainian head of state said Russia is undermining the Ukrainian state, destroying its infrastructure, and “deliberately” provoking a food price rise. “There will be political turbulence and violence and new refugees will be looking to save their lives.”

Zelenskyy called for further sanctions against Russia, and said: “They’re still looking forward to subduing and occupying all of the Ukrainian people, we want to do our best to make sure that Russia will start looking for peace and leave us alone.”

The Russia-Ukraine war, which started on Feb 24, has drawn international outrage, with Western countries and their allies implementing tough financial sanctions on Moscow. — Bernama