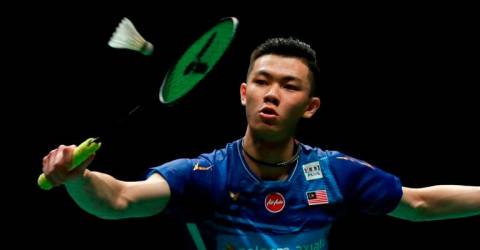 KUALA LUMPUR: National men’s singles ace Lee Zii Jia(pix) cruised into the third round of the World Badminton Championships after disposing of Portugal’s Bernardo Atilano at the Tokyo Metropolitan Gymnasium in Japan today.

World number five Zii Jia needed just 36 minutes to oust Bernardo 21-9, 21-13 in the round of 32 to set up a third-round clash against Zhao Jun Peng, after the world number 23 China shuttler defeated India’s Srikanth Kidambi 21-9, 21-17 earlier.

The sixth-seeded Malaysians will take on compatriots Goh Sze Fei- Nur Izzuddin Rumsani for a place in the quarter-finals tomorrow.

Aaron said they would strive to be consistent every time they take to the court.

“We are looking for improvement in our game play because our consistency is not that good. So, we want to improve… Thank you to all our Malaysian fans for supporting us as we will try our best in every game,” Aaron was quoted as saying by the Badminton World Federation (BWF).

It was, however, the end of the road for Ong Ewe Sin-Teo Ee Yi, who were the men’s doubles bronze medallists at the previous edition of the world meet, when they were sent packing 20-22, 20-22 by Singapore’s Hee Yong Kai Terry-Loh Kean Hean.

There was also good news in women’s doubles when Pearly Tan-M. Thinaah also marched into the third round after beating India’s Treesa Jolly-Gayatri Gopichand Pullela 21-8, 21-17.

“Actually, they (Treesa-Gayatri) are a good pair, they’re also younger than us by a few years… they have really improved. But that also made us prepare well for today’s match. We didn’t let our guards down and we did our best,” said Thinaah.