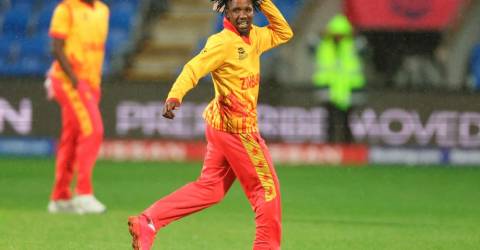 Zimbabwe won the toss and elected to bat but rain forced a delay of over two hours and 30 minutes before play began in Hobart and they soon slipped to 19-4.

But Madhevere, who made an unbeaten 35, hit back and put on a key stand of 55 with Milton Shumba (18) to enable a fighting total for Zimbabwe, who made their first ever Super 12 stage in the tournament.

Parnell sent back skipper Craig Ervine for two after a frenetic start by Zimbabwe, with batsmen living dangerously while running between wickets.

Ngidi struck twice in the next over including the in-form Sikandar Raza for a duck after wicketkeeper Quinton de Kock took a leaping one-handed take behind the stumps.

But Madhevere, who smashed four fours and one six in his 18-ball knock, and Shumba, who got out on the final delivery of the innings off Anrich Nortje, put up a gritty show. – AFP