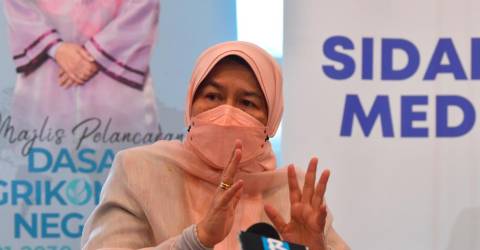 KUALA LUMPUR: Plantation Industries and Commodities Minister Datuk Zuraida Kamaruddin(pix) said she would resign as minister if directed to do so by Prime Minister Datuk Seri Ismail Sabri Yaakob.

“If he (prime minister) asks me to relinquish the post, I will resign,“ she said when asked if she was willing to resign from the Cabinet after quitting Bersatu to join Parti Bangsa Malaysia.

She told a press conference this after launching the Global Funding for Rubber Innovation (GFRI) here today.

Zuraida said she was still waiting to see the prime minister to discuss her Cabinet position.

The prime minister confirmed last week that he had yet to meet Zuraida to discuss her position in the Cabinet.

Ismail Sabri had said this was because Zuraida was still on leave after returning from a working visit to Turkiye and Greece.

When asked whether she would attend tomorrow’s Cabinet meeting, Zuraida said she was still discharging her duty as a minister.

“As the prime minister said, I am still a minister. That’s why I am here to officiate at this programme today,” she added.-Bernama