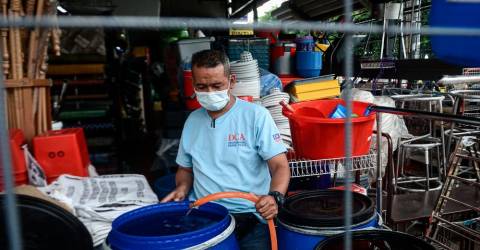 KOTA BHARU: A total of 445 static water tanks have been placed in areas that often experience water supply disruptions in Kelantan during Aidilfitri celebration this year.

“AKSB requests the cooperation of consumers and members of the public to channel immediately any complaints, including incidents of broken or leaking pipes to AKSB’s official complaints platform such as the myAKSB application,” he said when contacted by Bernama.

Azuhan said nine AKSB tanker lorries and additional 31 tanker lorries would be supplying water to the static water tanks at hospitals, schools, and commercial centres as well as customers who applied specifically for the elderly.

“Apart from that, the long-term mitigation plan includes the construction of new plants to supply treated water to the areas,” he said.

Previously, AKSB was reported to have said that its water treatment plants (LRAs) will operate at maximum capacity with a total water production of 519 million litres per day (MLD) to meet the expected increase in demand during the Aidilfitri celebration.

It said that AKSB’s scheduled maintenance work, which could result in a reduction in production, is being postponed, apart from ensuring that the stock of chemicals at the LRAs is sufficient for the operation of the plants during Aidilfitri.-Bernama