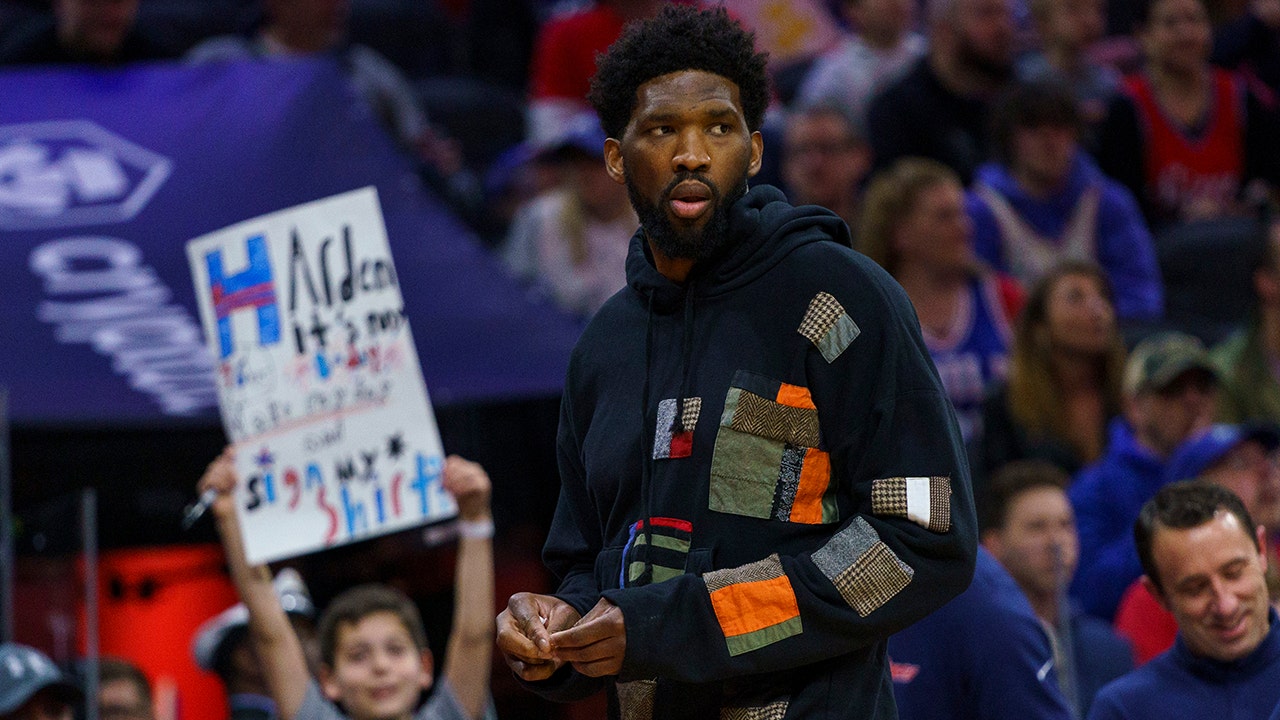 Joel Embiid was good-naturedly swatted with towels by his 76ers‘ teammates as “MVP! MVP!” chants filled the arena.

Allen Iverson cheered from his courtside seat for Embiid, too.

That made two 76ers’ scoring champs in the house.

Embiid clinched the NBA scoring title on Sunday to become the first Sixer — and first international player ever — to top the league since Iverson won the last of his four crowns 17 years ago.

Embiid sat out the 76ers’ 118-106 win over Detroit and finished at 30.6 points per game. Milwaukee’s Giannis Antetokounmpo also rested Sunday, finishing at 29.9 points.

Philadelphia 76ers’ Joel Embiid looks on as he has the night off during the first half of an NBA basketball game against the Detroit Pistons, Sunday, April 10, 2022, in Philadelphia.
(AP Photo/Chris Szagola)

Embiid, the No. 3 overall pick in the 2014 draft, became the face of the 76ers’ rebuilding effort more commonly known as The Process. Embiid embraced the nickname and is introduced before every home game as Joel “The Process” Embiid.

He’s been dominant again and is one of the contenders for NBA MVP — an award he had set as a season goal. Embiid finished the season on a streak of nine games with at least 20 points and 10 rebounds. He had a whopping 12 games of 40 points and 10 rebounds, joining Russell Westbrook and Moses Malone as the only players to hit that mark since the NBA-ABA merger in 1976-1977.

Embiid posted those numbers in just 33.8 minutes per game this season, the fewest minutes averaged in a season by the scoring champion in the shot-clock era.

Embiid is the first center to win an NBA scoring title since Shaquille O’Neal in 1999-00.

“I don’t do a lot of campaigning, and I’m not going to sit here and do a whole bunch,” Rivers said. “I think Joel has campaigned enough with his play. He really has. I don’t think people realize how hard it is for a center to lead the NBA in scoring. It’s so much easier for guards because they have the ball and they can shoot whenever they want to. Centers are incumbent not only on getting the ball but they’re the easiest guy to get trapped as well.”

Embiid did finish runner-up last season to Denver’s Nikola Jokic in MVP voting. While the Denver star was a deserving winner, he played in 72 games and logged 2,488 minutes to Embiid’s 51 games and 1,585 minutes.

Embiid, a 7-footer out of Cameroon, this season was the first Sixer named an All-Star starter for five straight seasons since Iverson. Iverson, a 6-foot guard, won the last of his four scoring titles in the 2004-05 season.

Embiid and the Sixers play Toronto in the playoffs and will try and win their first NBA championship since 1983.