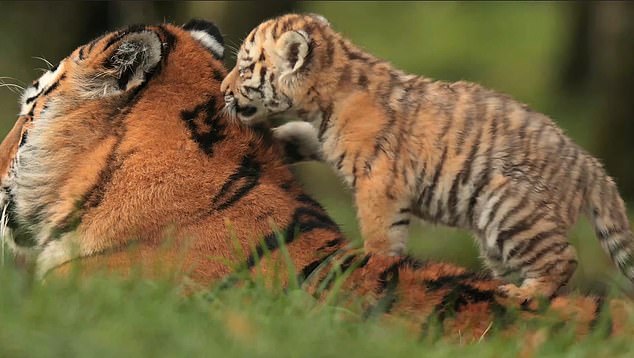 By Eirian Jane Prosser For Mailonline

Two adorable newborn tiger cubs have been spotted exploring and playing with their mother at a British zoo.

The clip shows one adventurous Siberian tiger cub climbing up its mother’s back before scrambling onto her head.

The cheeky tiger then tries to bite the tigress’s ears disturbing her sleep. The youngster then turns around and leaps of the huge tiger’s back.

The beautiful tiger family live at Banham Zoo in Norwich.

More footage, captured by 40-year-old business development manager and photographer Talvinder Chohan, shows the two sleepy cubs trying to take a nap on their mother’s back when they are suddenly awoken.

One of the startled, snoozy cubs tries to get comfy again but quickly gives up, getting distracted by something else and is seen running off through the grass.

Mr Chohan said: said: ‘Any wildlife or zoo animal photography is all about patience as you are on the animal’s terms.

‘I had to simply wait and try to predict where they may move. I’m able to predict certain behaviours just through simple observation and experience. 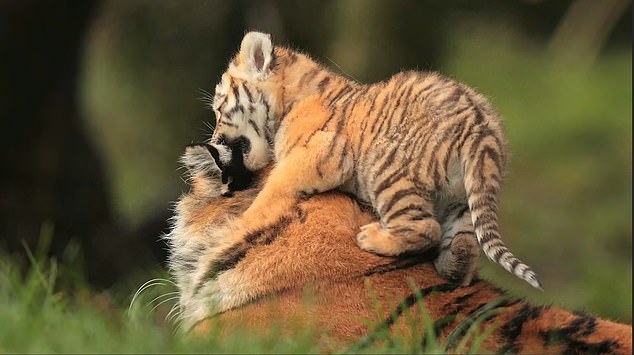 ‘I like how the tigress is so powerful, yet so gentle and I think images like these can help people to relate to and appreciate tigers which is a step towards conserving them for the benefit, enjoyment and education of future generations.’

The beautiful creatures can live up to 20 years long. The animals can grow up to 80 inches long, with an additional 30 inches for their tale and can weigh up to 670 pounds.

Tigers are the largest of all wild cats and at one point there were nine different types of tigers, according to the National Geographic. Three subspecies became extinct in the last century. 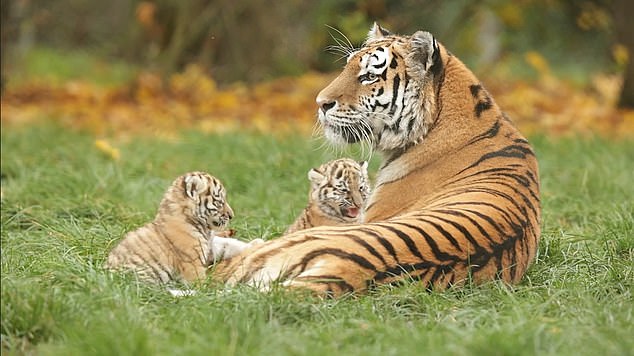 More footage of the beautiful Siberian tiger family, shows the sleepy youngsters’ being woken up from a nap as their mother moves slightly

Siberian tigers, like the playful cubs, are the most endangered of the species, with poaching remaining a very significant threat.

Siberian tigers primarily live in Russia’s birch forests but can also be found in parts of China and North Korea.

Mr Chohan added: ‘These were in captivity, Banham Zoo, so you can get reasonably close, but it’s important not to get too close in order to avoid disturbance.

‘I did feel I had captured something special, and that was later confirmed by the positive response on the internet and social media.

‘Tigers are still threatened and poaching, habitat loss, human-animal conflict are just some of the challenges they face, but there is hope as we have seen slight recoveries in populations, in particularly India with the Bengal tiger.’