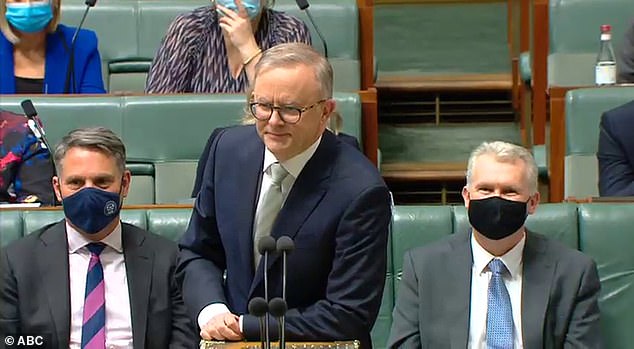 By Nic White In Canberra For Daily Mail Australia

Anthony Albanese has correctly answered a question about interest rates and received mocking applause from the opposition.

The prime minister famously could not quote the record low interest rate of 0.1 per cent in April, writing off his first week of the election campaign.

But on Monday he was well prepared when he was hit with it during Parliament question time as the rising cost of living was discussed.

‘How much higher is the cash rate today compared to when you came into government and how much more are Australians paying on a typical mortgage as a result? Angus Taylor asked.

Mr Albanese replied: ‘The cash rate today is 1.35,’ correctly stating the cash rate, which rose three times in the months since his disastrous answer.

The Coalition benches erupted into was was clearly mocking cheers and applause at the PM giving the correct figure this time.

‘The Reserve Bank said, prior to the election, they foreshadowed interest rate increases,’ Mr Albanese continued.

‘If those opposite want to argue that if the government had not changed, if the Australian people had not voted for change on May 21, interest rates would be the same, then they are just kidding themselves.’

The PM then accused the opposition of not taking responsibility for anything it did during nine years of government that led to the rising cost of living.

It should be noted that he did not actually answer the question put to him, which Mr Taylor tried to argue but was too late as the PM had finished speaking.

Mr Albanese almost derailed an unlosable election in the opening days of the campaign on April 11 when he couldn’t quote the important figure.

The Labor leader was asked if he knew what the cash rate was but dodged the question by saying: ‘We can do the old Q and A over 50 different figures’.

He was later asked what the national unemployment rate is. He tried to guess but got it wrong.

‘The national unemployment rate at the moment is… I think it’s 5.4… sorry. I’m not sure what it is,’ he said.

The unemployment rate was four per cent at the time, the lowest since 2008.

This disastrous press conference dominated headlines for the whole week and made the first week of the campaign a writeoff, but he rebounded and easily won the election.