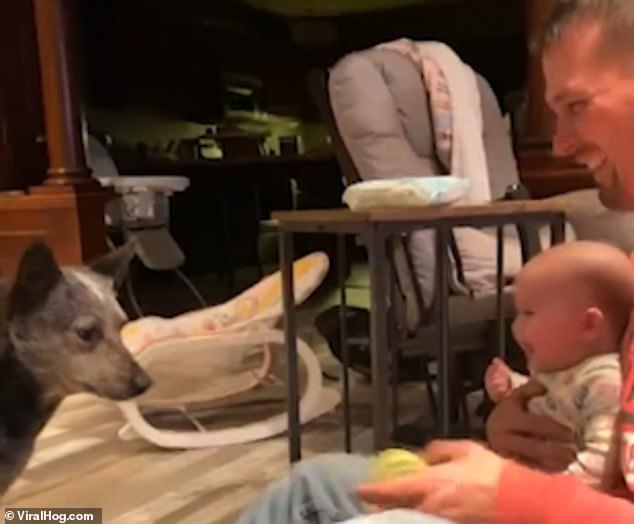 Having a ball! Baby girl squeals with laughter as her dog plays fetch in adorable video


Heartwarming footage shows an excited baby breaking out into hysterical laughter as she watches her family’s dog play fetch.

Chelsea Spencer said she had ‘never heard’ her daughter Collins squeal with quite so much joy until she got to watch the pet pooch scramble around after a tennis ball.

The footage was recorded at their family home in Butler, Missouri on January 7.

In the video, Chelsea films her five-month-old daughter sitting on her partner’s lap as he throws a ball to their dog.

Each time the dog scrambles backwards to search for the ball as it bounces into the kitchen, Collins lets out a squeal of delight.

The excitement continues to build for the baby as the dog keeps bringing back the ball, and Collins’ infectious laugh even makes her parents fall apart in giggles.

Chelsea said: ‘We’re sitting on the floor with our daughter Collins at our home when our dog lady brought over the tennis ball to play fetch.

‘After throwing the ball Collins starts laughing hysterically. We had never heard her laugh like this before so we had to capture the moment!

Footage taken by Chelsea Spencer shows her five-month-old daughter Collins break out in hysterical laughter as she watches their dog play fetch at their Butler, Missouri home

‘I had uploaded it to my Snapchat and I had a few friends tell me I should put it on TikToc because it was hilarious.

‘It resulted in tons of views, likes, and several comments about how it made everyone’s day and that baby giggles were the best!’

The video was posted on TikTok and has since racked up almost 120,000 views and hundreds of comments. 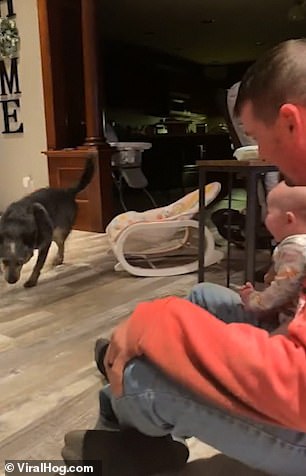 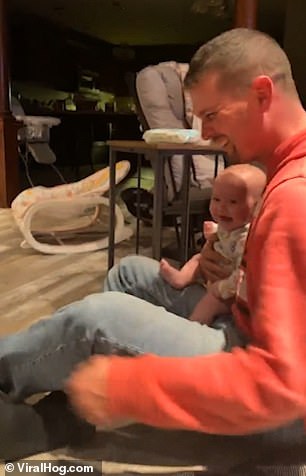 Each time the dog scrambles backwards to search for ball as bounces into the kitchen, Collins lets out a squeal of delight

Debbie Morrow commented: ‘That is the cutest and sweetest thing i have ever heard.’

Sharon added: ‘The best family time ever. The dog is happy, the dad is having fun, the mom is laughing and the baby is having the best time ever.’

Luella Tracy said: ‘My 7 month old laughs like that at the dog also, it’s the best ever.’

Ruth Vidal wrote: ‘Imagine if we all laughed like that at least once a day! instant healing.’