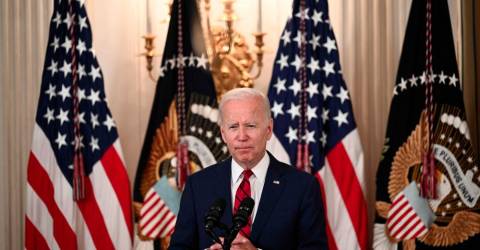 ANKARA: US President Joe Biden intends to seek reelection in 2024, with the support of the First Lady, he said in an interview.

“I have not made that formal decision, but it’s my intention. My intention to run again. And we have time to make that decision,“ Anadolu Agency reporter Biden told MSNBC in an interview broadcast on Saturday.

He stressed that he hasn’t formally announced his candidacy yet because he has to treat himself “as a candidate from that moment on.”

Biden is in near the middle of his four-year term. If he declares he is running for president again, certain legal rules kick in.

On the views of first lady Jill Biden, the president said his wife supports him in his decision, the report added.

“My wife thinks that we’re doing something very important and that I shouldn’t walk away from it,” he added.

Now 79 years old, Joe Biden has been America’s oldest president since he took office in January at age 78.

According to Anadolu Agency, while he is generally liked by Democrats, some say they hope a younger candidate or one who is less centrist than Biden will emerge. – Bernama