It comes after the Conservative leader won a majority in the election, with the party being on track to rack up 362 seats.

Speaking on Good Morning Britain the Prime Minister’s father Stanley Johnson, said he had congratulated his son, while his sister Rachel said it had been an ‘historic victory’.

Despite the Prime Minister being victorious, host Piers Morgan claimed one of the biggest stars of the election had been Ms Symonds.

Piers said: ‘Can we talk about one other person in all of this who has been a bit of a star, Carrie.’

He then gestured his pen towards Rachel, to which she responded: ‘I’ve never met Carrie’.

Piers was shocked that she had never met her and said ‘really’.

Rachel responded: ‘Well not yet. It’s not something I came to talk about’.

Sensing she was clearly uncomfortable with the line of conversation, Piers turned to Stanley and asked him if he had met his son’s girlfriend.

Stanley said: ‘I share and interest in environmental matters, I share an interest in animal welfare matters. I’ve had the privilege of talking about Japanese whaling after Carrie and before Carrie. 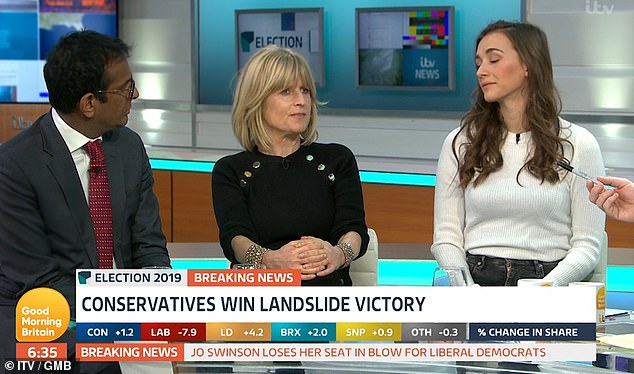 Piers joked that the family ‘are united’ even if all the family hadn’t met her.

Earlier on in the programme Stanley was asked if he had spoken to his son since he had won.

Stanley said: ‘No but I have spoken to him on WhatsApp. I said ‘things seem to be going all right don’t they’.

He admitted his son had not yet replied and asked Rachel what she thought. She said she doesn’t call his Boris but ‘Al’.

She added: ‘It’s historic, he has made history.

‘He was lucky because he got the opposition to grant his an election in his honeymoon period.

It was a high risk gamble but it has proved high reward.’