Brussels reacted with relief and sadness last night as Boris Johnson headed for a commanding victory in the general election.

EU leaders followed the results on Twitter as they held a working dinner at a summit in Brussels.

Sources said there was no live TV stream in the room and that they resorted to using social media on their phones.

One senior source said: ‘Boris has never had so many supporters in Brussels.. There was sadness but also relief. The uncertainty had to end.’

An EU diplomat added following the exit poll: ‘The British voters have decided. We will have to say good-bye to our British friends quite soon which people are sad about, and will meet again at the negotiating table discussing our future relationship.’

Summit: EU leaders followed the results on Twitter as they held a working dinner at a summit in Brussels (the heads of government are pictured posing for a photo yesterday)

EU Commission chief Ursula von der Leyen said: ‘Of course we have to wait for the final result, but when we do we will congratulate the winner and I think we will immediately listen to the new prime minister just to be reassured and have reaffirmed what the pathway is.

‘We are all set for whatever the case is. We have the structures internally and are ready to negotiate whatever is necessary. It will be important tomorrow to get the mandate for the steps from the EU Council so this will be our focus tomorrow.’

Mark Rutte, the Dutch prime minister, said that all the EU leaders saw the results come in on their mobile telephones but did not discuss it at length.

He said: ‘If this is the result, then on the British side they could speed up the process. That means on our side we need to agree the next steps including on a negotiating position with a view to a new arrangement.’

Arriving at the summit leaders said they were hoping for a large Tory majority as it would also make getting a post-Brexit trade deal through the Commons much easier. 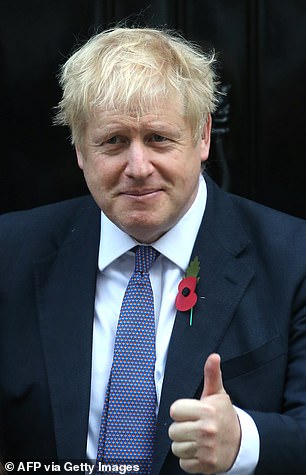 He said: ‘I just hope that the result is decisive so we know where we’re going over the next few months…I think the best thing for Ireland, the UK and Europe would be for an end to the uncertainty.

‘What’s been very difficult to work with is a hung parliament that wasn’t able to come to a majority decision on anything and I just hope we’re not in that position again tomorrow.’ Luxembourg’s prime minister Xavier Bettel said it would allow both sides to ‘fulfil the agreement that we had decided on both sides’.

He said the large majority was also important for getting the future trade deal through the Commons.

He said: ‘We will need to have a parliament in London that agrees to that [the withdrawal agreement] and all the future relations very quickly.’

It paves the way for EU leaders to use the second day of the summit today to agree on draft legal text which, seen by the Mail, which states that negotiations on the future trade deal should begin ‘immediately’ after Britain leaves on January 31. This is so the bloc ‘swiftly’ sets its negotiating mandate for the talks.

However, they also add: ‘The future relationship will have to be based on a balance of rights and obligations and ensure a level playing field.’ This could prove problematic for Mr Johnson as hardline Brexiteer MPs who blocked the first withdrawal agreement brokered by Theresa May could also try to block any future trade deal with such stringent ‘level playing field’ conditions.

These would keep the UK tied to Brussels rules for workers’ rights, state aid and environmental and consumer protection.

However, with such a large projected majority Mr Johnson would still likely get a deal through even if he compromised on standards.

One senior Brussels official told the Mail: ‘Level playing field is an absolute red line. There can’t be a deal without it.’ Mr Johnson has pledged to deliver a trade deal by the end of next year and avoid extending the so-called transition period, which keeps Britain in the EU customs union and single market.

But if new trading terms are not in place by the end of December 2020, Britain risks crashing out on No Deal terms. 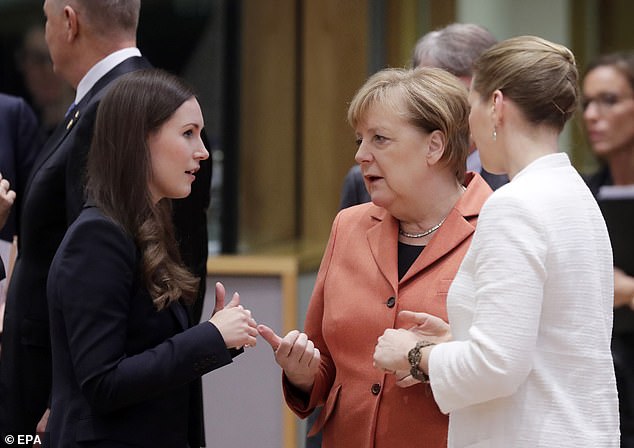 Michel Barnier, the EU’s chief negotiator, has privately and publicly expressed concern that Mr Johnson’s 11-month window for reaching a comprehensive deal is not enough time.

He told MEPs this week: ‘Eleven months is very unrealistic for such wide-ranging negotiations. We will have to try to do everything possible, particularly to avoid a cliff-edge [at the end of 2020].’ Brussels sources say it will only be possible to agree a ‘basic, bare bones’ trade deal by the end of 2020 and expect Mr Johnson to consider extending the transition period to reach a more comprehensive agreement.

Last night they said such a large majority may give Mr Johnson more room for manoeuvre in convincing MPs to extend the transition period.

This would also allow for talks to take place simultaneously for other areas of the future relationship, such as defence cooperation, fishing and security.

The withdrawal agreement includes the option to extend the transition for up to another two years.

The senior official added: ‘You could get a partial or basic deal done [by December 2020] but it would be hugely damaging to the British economy, because you’d be leaving on a partial No Deal.

‘We have heard Mr Johnson say things before that he hasn’t followed through on, so I think we will wait and see.’

A senior diplomat from one member state said: ‘Trade would have to be prioritised in the 11-month window so that a basic agreement on trade is feasible by end of 2020, but to have a complex agreement after that it will take a bit more time.’

Mr Johnson is not attending the two-day summit due to the general election and handed his vote to new EU Council chief Charles Michel.