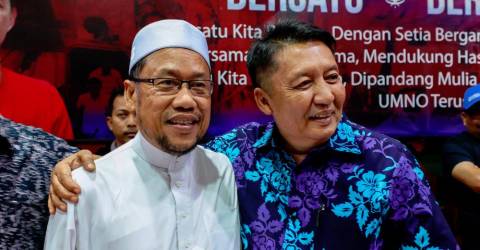 “The question of who would be contesting the Tumpat seat has been answered when Che Abdullah, previously from PAS, agreed to contest on a BN ticket.

“We held a series of discussions with him on his candidacy and he finally agreed to accept the offer,” he told reporters when met at the state UMNO liaison office, here, today.

Yesterday, Kelantan Perikatan Nasional (PN) announced the names of 14 candidates who will be contesting in GE15.

However, the Bachok and Tumpat incumbent MPs, Nik Mohamad Abduh Nik Abdul Aziz and Che Abdullah, were not listed as Kelantan PN candidates this time.

In GE14, Che Abdullah won the Tumpat seat with a majority of 17,500 votes to defeat his challengers from BN and PKR. – Bernama