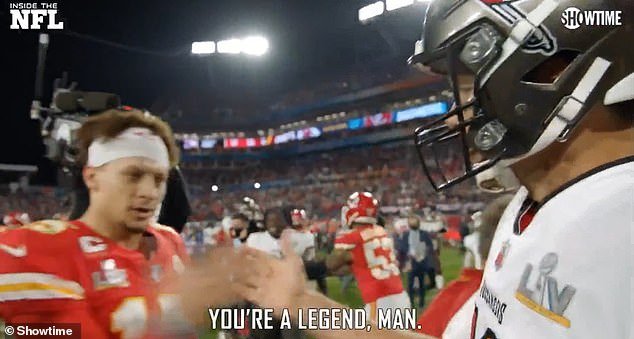 In the clip, Chiefs tight end Travis Kelce also congratulates Brady on his seventh Super Bowl victory, telling the star quarterback he had ‘a feeling you’d figure it out’.

The video was released this week after it was revealed that Brady sent a ‘lengthy’ apology message to Chiefs safety Tyrann Mathieu following their heated exchange at the end of the second quarter. 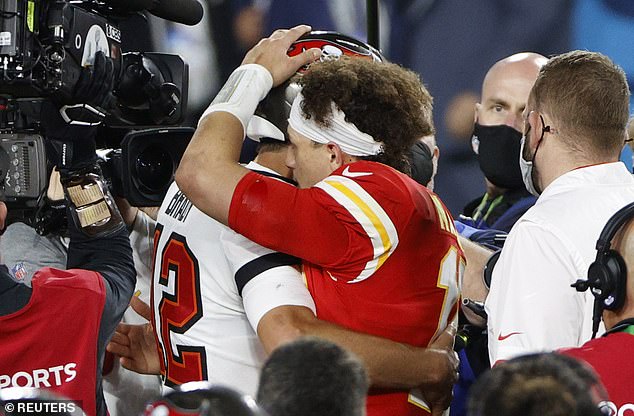 The star quarterbacks met at midfield immediately after the game, as pictured

It is not yet been revealed what Brady said to Mathieu that sparked the altercation, but the Chiefs player claimed in now-deleted tweets that he ‘called me something I won’t repeat’.

‘But yeah I’ll let all the media throw me under the bus as if I did something or said something to him,’ Mathieu added.

‘Go back to my previous games against TB12 I showed him nothing but respect. Look at my interviews about him… I show grace.’

‘He’s clearly chasing me, but I got flagged… lol,’ he wrote in a further tweet, which he also later deleted. 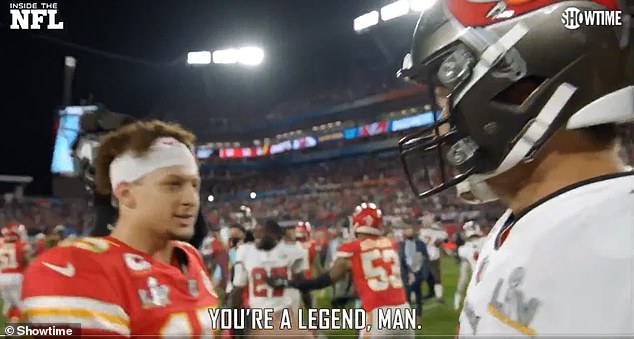 ‘You’re a legend, man,’ Mahomes is heard telling Brady in the new clip 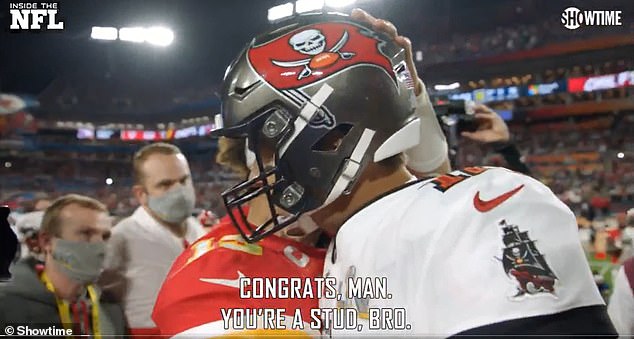 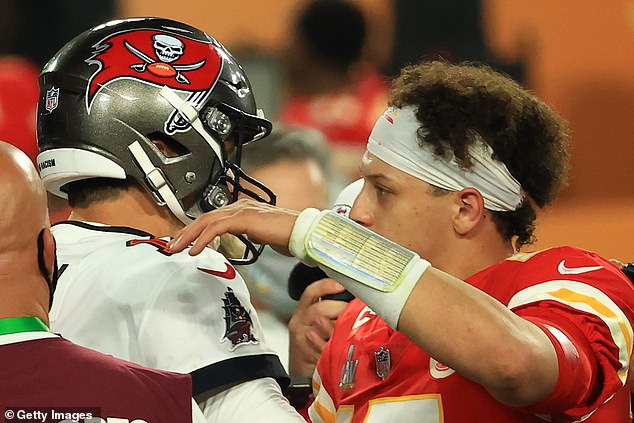 Mathieu was whistled for unsportsmanlike conduct leading up to Brady’s outburst, which saw the Tampa Bay Buccaneers quarterback chase down his Chiefs antagonist before the two were separated moments before halftime.

‘I’d never really seen that side of Tom Brady, but whatever,’ Mathieu told reporters during a press conference after the game. ‘No comment. It’s over with.’

Although Brady’s exact words aren’t clear, some claimed he looked like he told Mathieu that he would be targeting him in the passing game.

‘Brady tells Mathieu he’s going at him all game,’ tweeted podcaster, @JomBoy. ‘goes after him. then lets him know he went after him.’

According to ESPN, in his apology, Brady told Mathieu that he was a ‘class act’ and a ‘great leader’ and that he had watched him play since LSU.

It also reports that Brady said that he wished he could have apologized in person.

The clip of Kelce congratulating Brady also comes after his girlfriend likened the Tampa Bay Buccaneers victory to ‘Chiefs vs the Refs.’

She then added: ‘If y’all wanted to see the Chiefs vs the refs just say that.’

Later, back on Twitter, Nicole conceded defeat: ‘Congrats to the @Buccaneers. Tough game to watch but y’all got it.’ 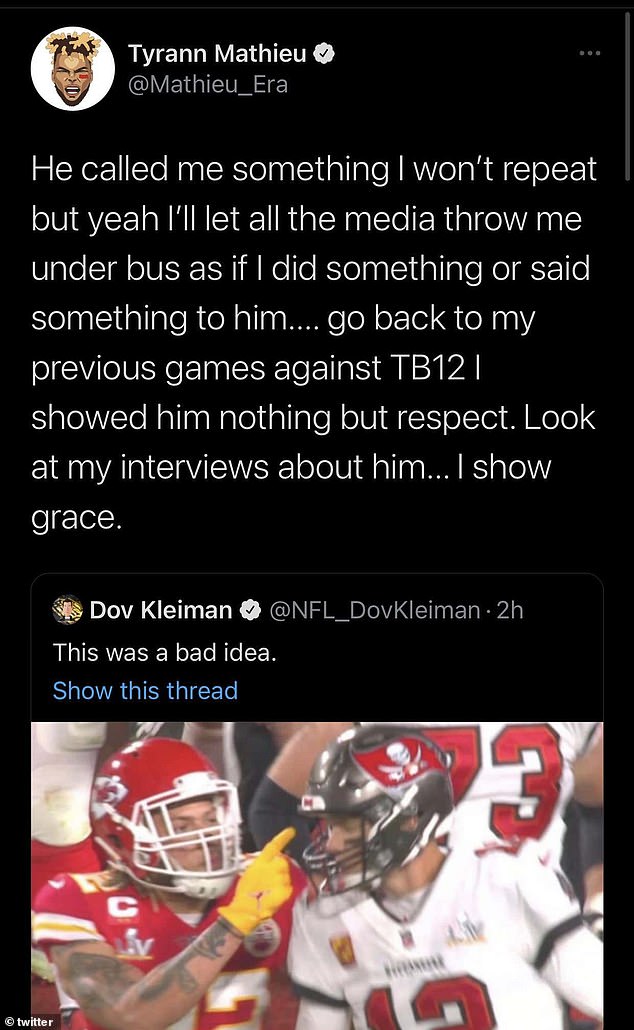 The video was released after Brady sent a ‘lengthy’ apology message to Chiefs safety Tyrann Mathieu following their heated exchange at the end of the second quarter. Mathieu had said in a now deleted tweet that Brady ‘called me something I won’t repeat’, pictured 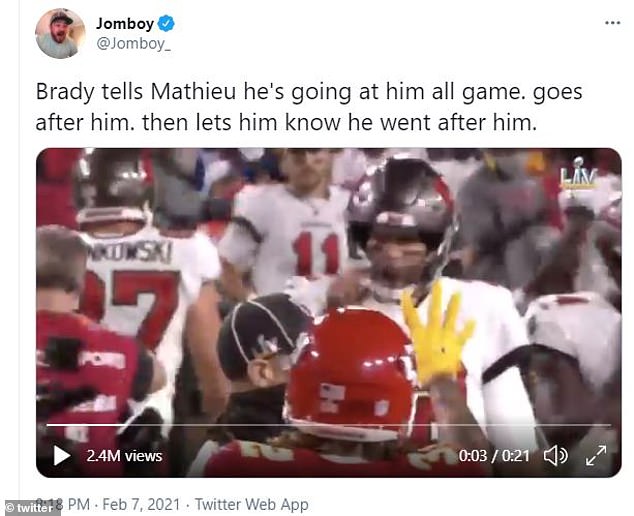 Podcaster @JomBoy tweeted the claim that ‘Brady tells Mathieu he’s going at him all game,’ tweeted . ‘goes after him. then lets him know he went after him’, pictured

Mahomes had a similar situation with his mother, who tweeted at Tom Brady’s wife Gisele Bundchen after the game: ‘If you have to have the ref on your team is that really winning!!! @giseleofficial lol.’

The defending champion Chiefs lost, 31-9, as the Kansas City offense failed to score a touchdown for the first time since Patrick Mahomes became the team’s starting quarterback.

Mahomes finished the game with 270 passing yards and two interceptions and earned himself praise from the Bucs receivers watching from the sideline.

‘Mahomes is unbelievable,’ Bucs wideout Mike Evans was heard saying in another clip released by the NFL on Tuesday.

‘Yo, he is a magician. I’m convinced,’ added Chris Goodwin.

According to Next Gen Stats, Mahomes totaled 497 yards before throwing the football or being sacked by the Buccaneers defense, which was the highest total of any quarterback in the NFL this season.