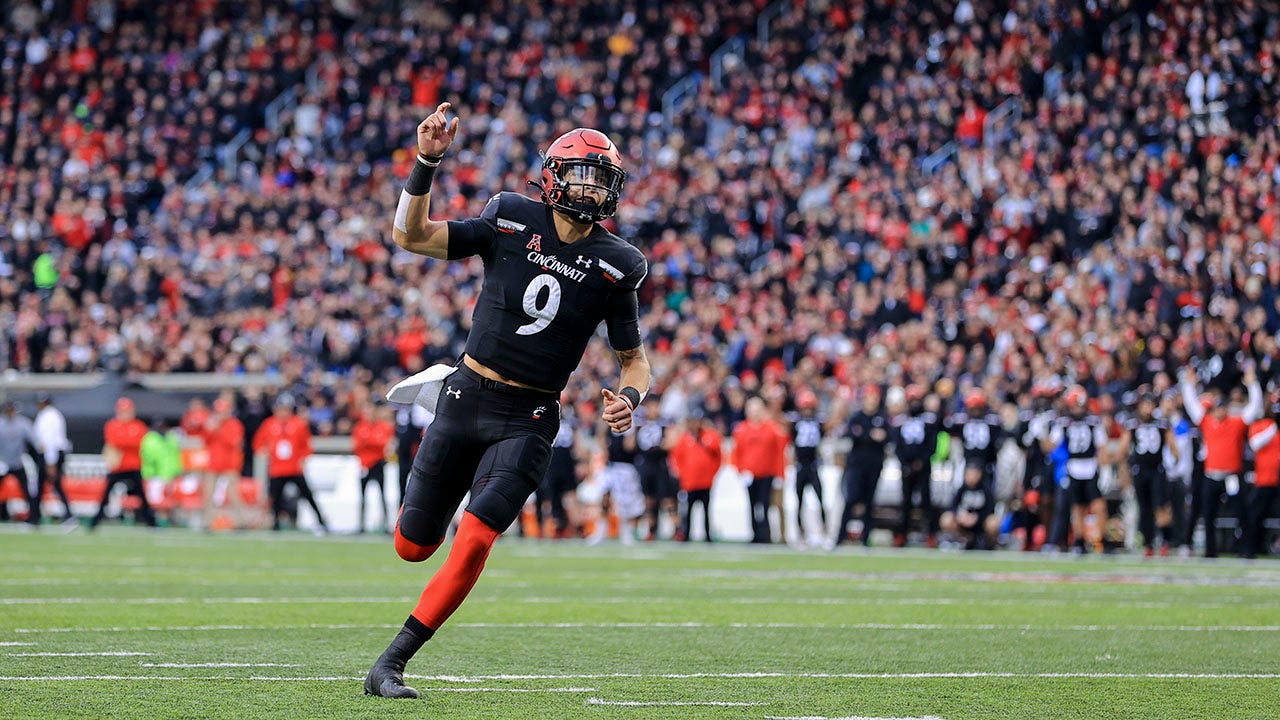 The 2021 college football conference championships will have major College Football Playoff implications on Friday and Saturday and a few teams could lock in a position with a win or move down with a loss.

Six teams will have fans biting their fingernails while watching their games between Friday and Saturday, and each has one loss, except for Cincinnati, which is undefeated but is playing for a non-Power 5 Conference title.

One team that may be safe with a loss is Georgia. The Bulldogs have one of the best defenses in the sport and have blown through almost every opponent they’ve faced. The team has four wins against ranked opponents and the closest victory came in a 10-3 win over No. 3 Clemson in Week 1.

Should Georgia lose to Alabama, the team still has a great chance of being in the Top 4.

The final selection show is set for Sunday at noon ET.

With all that in mind, here are the teams hanging by a wire.

Hassan Haskins of the Michigan Wolverines celebrates with teammates after his touchdown against the Ohio State Buckeyes on Nov. 27, 2021, in Ann Arbor, Michigan.
(Mike Mulholland/Getty Images)

Michigan is ranked No. 2 in the College Football Playoff. The Wolverines picked up a big win over Ohio State last week but have the one lone blemish to Michigan State on their record. Losing to Iowa in the Big Ten title game may put them out of the Top 4 by next week.

Alabama was upset by Texas A&M earlier in the year and comes into the SEC title game against No. 1 Georgia. The Crimson Tide are No. 3 in the latest College Football Playoff ranking but a loss to Georgia could put everything in question. If Alabama wins, then they’re for sure in the Playoff but if they lose the committee is going to have a big decision to make. A lot of how the Playoff shakes out will depend on how the Crimson Tide performs on Saturday.

Cincinnati’s path to the College Football Playoff is easy – sort of. The Bearcats need to beat Houston in the American Athletic Conference title game to stay in the Top 4. A loss and they’re definitely out.

These two teams will fight for a Big 12 title but may find themselves possibly sneaking into the Top 4. A conference title in a Power 5 Conference will certainly weigh a lot when it comes down to the final selection process. Either team winning, more so Oklahoma State, will give themselves a good case for the Playoff. Michigan, Alabama and Cincinnati losing will certainly cause a lot of chaos.

Notre Dame doesn’t have a conference title game to play. Their one loss came to Cincinnati but none of their wins really sticks out given the way Wisconsin fell out of the picture late in the season. And with Brian Kelly bolting for LSU, the committee has made clear it may weigh that when it comes to the final pick. The Fighting Irish are waiting for some team to fall over the weekend and if that happens, Notre Dame will certainly have a case to be in the Top 4 being that they’re 11-1.