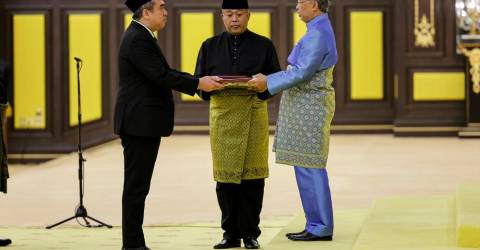 He said if the Unity Government under Anwar’s leadership succeeded, the entire country would benefit.

“That’s the only objective in joining, we will work hard to support his leadership and prove DAP is sincere in this effort to make the Unity Government a success,” he said at a media conference at DAP headquarters here today.

He said as DAP supported Anwar as prime minister unconditionally, the party was ready to sacrifice anything as a commitment to him.

On the four ministerial appointments from the party, Loke said the names suggested to the prime minister to join the Cabinet took into consideration their suitability in the portfolios, and the involvement of women and Indians.

“As a component party in Pakatan Harapan there are always discussions and consultations but we need to respect that the decision on the Cabinet is up to the PM,” he said.

On Umno president Datuk Seri Ahmad Zahid Hamidi’s appointment as deputy prime minister, he said the matter was under the jurisdiction of the judiciary.

“It’s up to the court, there is a legal process ongoing. We in the Cabinet only discuss national agendas not personal matters,” he said.

He also said that a DAP central committee meeting that took place a day after the 15th general election (GE15) gave the mandate to support Anwar as prime minister unconditionally and to establish a government.

He also expressed his gratitude towards Yang di-Pertuan Agong Al-Sultan Abdullah Ri’ayatuddin Al-Mustafa Billah Shah for consenting to appoint four ministers from DAP as well as Anwar for his belief in DAP members as Cabinet members.

Loke said the names for deputy ministers have yet to be submitted as the government is focused on forming the Cabinet among ministers.

“As far as deputy ministers are concerned, not yet because the arrangement is that Datuk Seri Anwar Ibrahim wants to set up the cabinet first just among the ministers, and then deputy ministers will come. So when the time comes, we will submit our recommendations,” he added.-Bernama