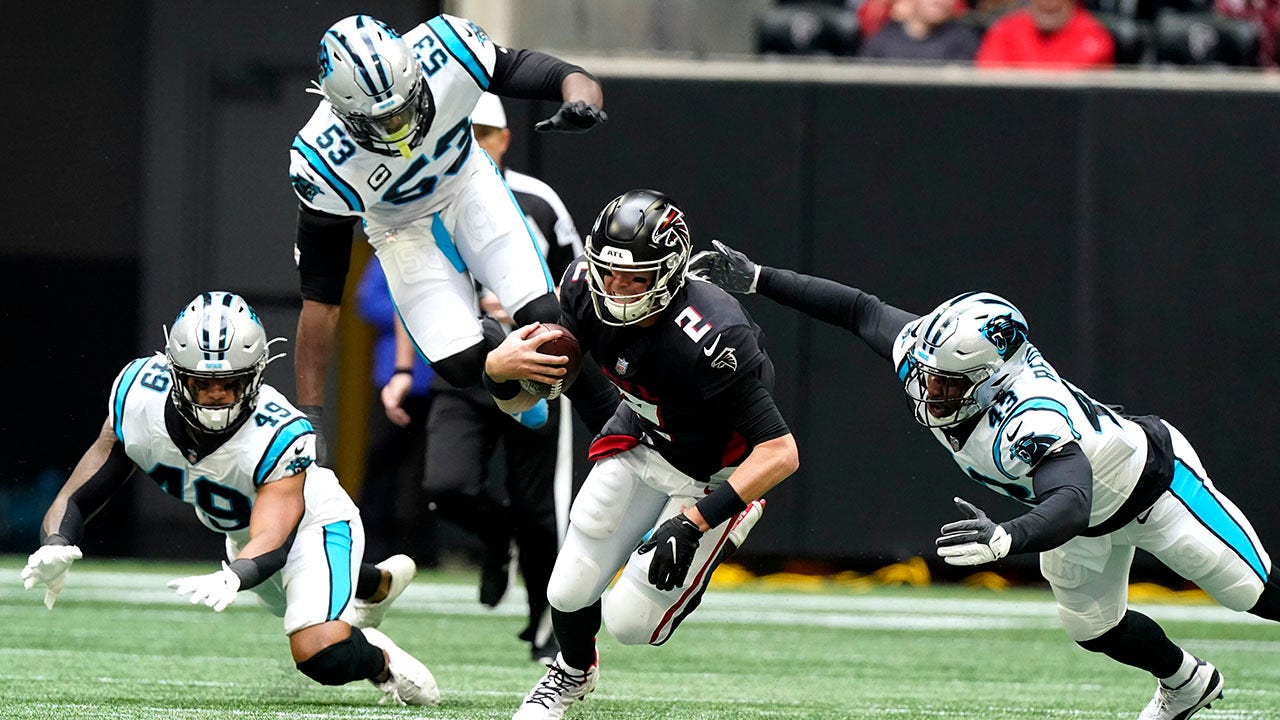 Zane Gonzalez kicked four field goals and Chuba Hubbard scored on a 6-yard run with 6 1/2 minutes remaining to seal Carolina’s 19-13 win over the Atlanta Falcons on Sunday, snapping a four-game skid for the Panthers.

Ryan had one of the worst games of his career, throwing for just 146 yards with two interceptions. He was sacked three times and sustained a bloody cut on his non-throwing hand when a Panthers defender stepped on it, though Ryan didn’t miss any plays.

Atlanta (3-4) had won two straight games, but the Falcons squandered a chance to climb above .500 for the first time since 2017.

With his job on the line, Sam Darnold bounced back from a benching in last week’s miserable 25-3 loss to the New York Giants with a performance that was just good enough to win for Carolina (4-4).

He threw for a mere 129 yards but made none of the glaring miscues that prompted speculation about how long he would remain the starter.

Darnold also rushed for 66 yards — the second-highest total of his career — but the last of those runs knocked him out of the game with a concussion in the fourth quarter.

On an 8-yard bootleg deep in Atlanta territory, Darnold took a brutal shot from Falcons linebacker Foye Okuokun that nearly knocked his helmet off. The quarterback was immediately sent off by the officials, leaving P.J. Walker to finish the game.

Walker nearly threw an interception on an ill-advised pass into the end zone, but it was ruled incomplete. Hubbard finished off the drive with his burst up the middle for Carolina’s only TD.

Younghoe Koo had a chance to put Atlanta ahead in the fourth quarter, but his 45-yard field-goal attempt was wide right.

It was his first missed kick of any kind this season. Koo had been 11 of 11 on field goals, hitting from 46 yards for Atlanta’s first points, and 14 of 14 on extra points.

Koo booted a 53 -yard field goal with 16 seconds remaining, but the Panthers easily recovered an onside kick to seal with victory.

It was the second game he has missed his season to deal with a personal matter, having also stayed home when the Falcons defeated the New York Jets in London on Oct. 10.

Panthers: Darnold’s concussion was Carolina’s most significant injury. … WR Robby Anderson took a big hit from Falcons S Erik Harris while trying to haul in a pass in the third quarter. Anderson crumpled to the turf while Harris celebrated, leading to a brief confrontation with Panthers S Sam Franklin Jr. Anderson was able walk off and returned to the game just a few plays later. … MLB Jermaine Carter Jr left the game in the first half to be evaluated for a possible concussion. He was cleared to return.

Falcons: Ryan sustained the cut on his left hand when Panthers DE Morgan Fox stepped on it in the second quarter. Ryan was bleeding badly but finished the possession, using a towel to wipe off the blood. After throwing an interception, he was taped up on the sideline and played the rest of the game with a black glove on his left hand.

Falcons: Travel to New Orleans next Sunday for their second straight NFC South game against the Saints.